Researchers have revealed a ‘bizarre’ star they say could be surrounded by a huge alien mega structure.

KIC 8462852 located between two constellations Cygnus and Lyra and 1480 light-years away, was monitored by the Kepler Space Telescope for more than four years, beginning in 2009.

Now researchers say they cannot explain strange fluctuations in the light it emits – leading some to claim it could have a huge alien mega structure in front of it. 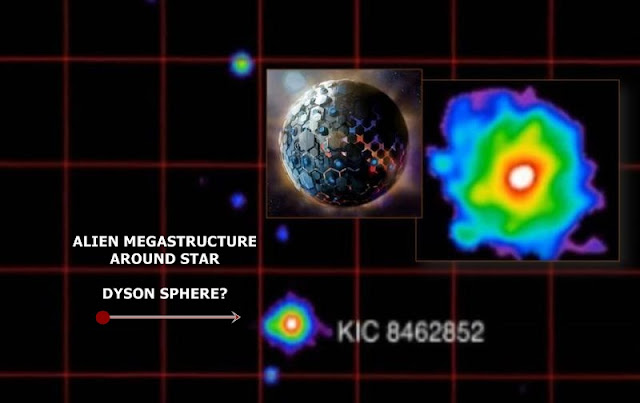 Jason Wright, an astronomer from Penn State University and specialized in searching for signatures of alien civilizations told the Atlantic “It looked like the kind of thing you might expect an alien civilization to build.”

“A Dyson Sphere constructed by an advanced alien civilization would be consistent with the findings.”

“A transit usually causes a star’s brightness to dim by less than one percent, and on a periodic basis but this mysterious star has experienced huge dips in brightness, up to 22%, which simply could not be the result of a planet, and it doesn’t seem to be occurring on any kind of cyclical basis. The light pattern doesn’t show up anywhere else, across 150,000 stars. We know that something strange is going on out there.”

Wright and his co-authors say the unusual star’s light pattern is consistent with a “swarm of mega structures,” perhaps stellar-light collectors, technology designed to catch energy from the star.

Wright admits that we should “approach it skeptically.” But it is an undeniably strange astronomical phenomenon, so there may be an equally strange explanation.