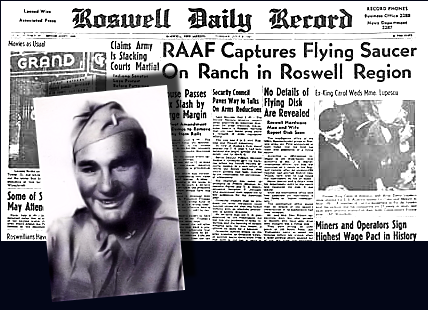 It seems that we keep coming back to some of the same tired questions. No matter what is presented in the way of testimony, it seems that someone has an objection to it. Lately it has been the idea that all the witnesses were contaminated by the publicity surrounding the Roswell case. Even when I was the first to talk with a witness, the comment seems to be that they had heard about or read about or seen something about the UFO crash so that their testimony is “born” contaminated.

In August 1995, Joe Stefula, who seems to be a skeptic for the alien visitation solution for Roswell was drawn into the investigation because, according to him, “I was retired, and Roswell seemed a chance to ‘play detective’ once again.”

Although he had been given a list of names by a fellow researcher, William P. LaParl, he had learned that most were dead but he did manage to “get Chester P. Barton on the telephone.”

Barton, though only a first lieutenant in 1947 had actually joined the Army in 1929 as an enlisted man. He was assigned to the 509th Bomb Group and he served in the Army until 1954 when retired as a captain. According to Stefula, Barton “Had read none of the books, seen none of the TV programs and seemed entirely unaware of the controversy.”

Yes, I know. It does seem strange that a guy who had been assigned to the 509th Bomb Group in Roswell in 1947 would be so completely unware of the stories about the UFO crash. I was watching Bar Rescue a few months ago when they renovated a bar near Fort Bragg and one of the pictures of military operations they hung on the wall in the background was from the 116th Assault Helicopter Company. I knew this because I recognized the insignia on the nose of the aircraft and I had been assigned to that unit. This was in the background and sort of flashed by but I caught it… Barton said he was oblivious to all that had been said about Roswell in 1947. I guess some people just don’t pay close attention.

Barton said that he had been ordered to report to Major Edwin Easley, who, as we all know, was the provost marshal in 1947. Easley told him to head out to the crash site to find out what was going on. He took a jeep carryall and drove out, taking about forty-five minutes to get there. He said that he passed through a checkpoint and the guards were apparently from the 1395th MP Company which was stationed at Roswell.

He said that he was never really close to the wreckage. He saw parts that he believed were from a B-29 and that there was a burned area associated with the wreckage which suggests this was not out on the Brazel ranch (okay, Foster ranch). He said that no piece he could see was identifiable as parts of an airplane. He picked up nothing because the MPs warned him about possible radiation contamination which might have been a way of convincing people not to handle the wreckage.

He made a verbal report to Easley and there was nothing in writing. Easley told him to forget about the incident but he was not required to sign anything or given a verbal oath for secrecy. Just Easley’s comment about forgetting about it.

Barton, it seems, believed that what had happened was a B-29 crashed that had been carrying atomic bombs. He didn’t see any wreckage he recognized and I have never found an aircraft accident, whether experimental, civilian or military that crashed near Roswell at that time.

While Barton did not participate in the clean-up, he did drive out to the field, did see wreckage and formed his opinion on what had happened. He mentioned there wasn’t enough wreckage if it had been a B-29 unless it had broken up or that some of it had already been removed from the field. The Air Force, during their mid-1990s investigation determined that there was no aircraft accident that would account for the wreckage which eliminates Barton’s belief that it was a B-29.

But the point here is that people want to hear from others who were in the field and talked about what they saw. Barton is just another voice who saw something strange in 1947, didn’t get close enough to see if the wreckage was extremely unusual but did provide some information about the distance to the impact site, did mention debris, did suggest a burned area and that he wasn’t supposed to talk about it. Just another voice that provided a little in the way of first-hand testimony.