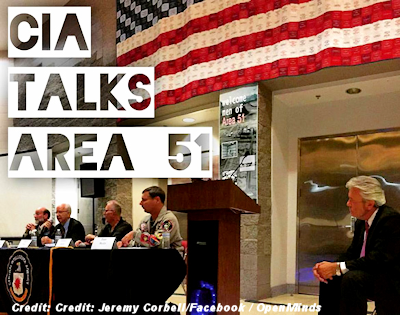 At a recent special event held by the National Atomic Testing Museum in Las Vegas, Nevada, a panel of former and current CIA employees answered questions about Area 51 and the discussion included talk about UFOs. However, their answers left some, including local media, doubting.

The National Atomic Testing Museum is home to an Area 51 exhibit called Area 51: Myth or Reality. It was opened in March, 2012, back when Area 51 was still officially a secret. The exhibit includes information about UFOs.

The museum plans on closing the exhibit at the end of the year, so they have been hosting Area 51 and UFO talks – including yours truly – over the last few weeks.

The panel was moderated by KLAS investigative journalist, George Knapp, who posted a story on the event on the KLAS website. He said the CIA panelists “had their tongues in their cheeks when talking about Nevada’s rock star of military bases: Area 51.”

Filmmaker Jeremy Corbell, who is working on a documentary about alleged Area 51 whistle-blower Bob Lazar, asked the panel if the CIA was still researching UFOs. […]