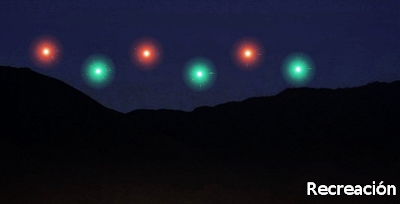 A set of flashing lights -of red and green color flew over the mountains at El Ávila National Park, at the level of Altamira in eastern Caracas and were observed on October 3rd by Jesus Martinez and his wife.

“It was a group of 20 lights, about moving in a straight line, like a plane, but did not respect distance, they passed each other like a race,” said the journalist Hector Escalante witness. He said that they “lit interchangeably, as if they were individual objects with their own autonomy.”

The incident sparked at 08:15 pm (HLV), while the couple was dining on the terrace of the restaurant 360, located on the 19th floor of the hotel Altamira Suites, in the Los Palos Grandes. He said that what they saw that night seemed “a flock of birds with lights moving” toward somewhere. Although he tried to take pictures with your cell phone, so far, he could not catch anything.

Martinez thinks the color of the lights, which were to be seen for a while to the extent that could distanciando- were treated professional drones. However, it recognizes that if so, should have been more. Also, the height at which moved not be achieved by such devices. “The truth is that it was quite strange,” he said.