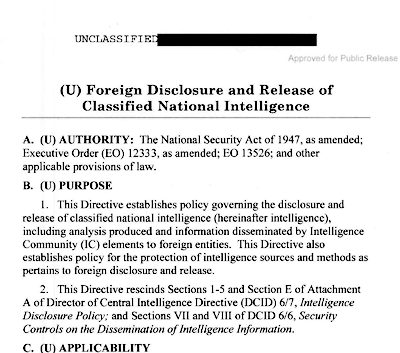 Classified U.S. intelligence information may be shared with foreign recipients when it is advantageous to the U.S. to do so and when it is not otherwise prohibited by law, according to a directive that was publicly released last week by the Office of the Director of National Intelligence.

“It is the policy of the U.S. Government to share intelligence with foreign governments whenever it is consistent with U.S. law and clearly in the national interest to do so, and when it is intended for a specific purpose and generally limited in duration,” states Intelligence Community Directive 403, Foreign Disclosure and Release of Classified National Intelligence, which was originally issued on March 13, 2013.

There are some nuances, however.

For example, intelligence will ordinarily be shared with] foreign governments or their components, coalitions of governments, or international organizations. But individual foreign nationals and independent contractors “do not constitute foreign entities for purposes of foreign disclosure or release except as designated by the DNI.”

(“Disclosure” here means communicating the intelligence without transfering a copy of it for retention. “Release” means providing a copy that the recipient can keep.) […]