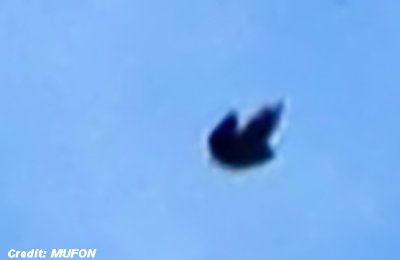 A British witness in London reported watching and videotaping a dark object crossing the sky that changed directions, slowed down and hovered at times that appeared to change shape, according to testimony in Case 67917 from the Mutual UFO Network (MUFON) witness reporting database.

The event occurred beginning at 2:55 p.m. London time on July 5, 2015, when the witness was sitting outside in his garden drinking a cup of tea.

“I was watching three birds when I noticed a fourth, dark shape in the sky,” the witness stated.“This was not moving in the same manner as the birds and caught my attention.”

The witness quickly began video recording the object on his mobile phone for approximately two minutes (video seen below).

“At this stage I decided to run to my room and get my DSLR. I changed the lens and put on a 50-300mm telephoto lens and returned to the garden which took approximately one minute. I took a series of photos at full zoom, however, in my excitement I did not check the images and the first 5 or 6 were over exposed. I adjusted the settings and took a further two photos at full zoom.”

Shortly after the last picture was taken, the object moved out of the witnesses’ line of sight. […]

UFO Morphs into Small Ball and Shoots Off at Blazing Speed