Scientists on the Rosetta mission have found oxygen in the gas cloud around comet 67P in what they described as the most surprising discovery about the comet to date.

It is the first time that molecular oxygen – the form of the gas we breathe – has been detected on a comet, and points to a gentle birth for comet 67P some time before the formation of the solar system. 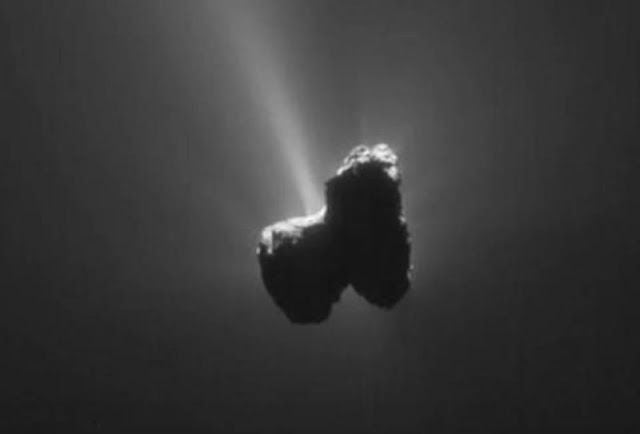 “It’s actually the most surprising discovery we have made so far on 67P because oxygen was not among the molecules expected in a cometary coma,” said Kathrin Altwegg at the University of Bern and

The finding is puzzling because oxygen is highly reactive and scientists do not expect it to hang around for long in space. “We had never thought that oxygen could ‘survive’ for billions of years without combining with other substances,” said Altwegg.

The scientists are unsure precisely how the oxygen got to be in the comet, but suspect that the answer lies in the cold and dense birthplace of the solar system called the dark nebula.

“This evidence of oxygen as an ancient substance will likely discredit some theoretical models of the formation of the solar system,” said Altwegg to theguardian, read more.

In the video below ThunderboltsProject will discuss the latest scientific papers on the European Space Agency’s Rosetta mission to comet 67P.

In addition to countless unresolved puzzles facing comet scientists, Thunderboltsproject discusses the problem of comet’s double-lobed shape and they talk about NASA’s New Horizons mission which has revealed that the Plutonian moon Hydra also has a double-lobed form like P67.

There are many different types of bodies in the solar system display the particular shape like Comet P67, therefore, despite scientists say it is a comet, we may wonder whether the comet is one of the artificially made space objects, created by aliens, which look like comets but in fact alien space craft, home of alien races. With the discovery of oxygen on the comet, the comet has surprised us again.