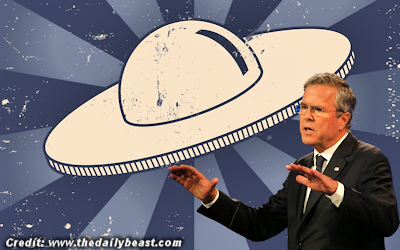 Here’s something every flailing campaign needs: an endorsement from Arizona governor-turned-pastry chef Fife Symington, who once wrote an op-ed about seeing a UFO.

A man who saw a UFO also sees Jeb Bush as president of the United States.

On Wednesday, Fife Symington, a former governor of Arizona who claims that “some form of an alien spacecraft” hovered over the mountains in Phoenix in 1997, endorsed something equally implausible: Bush’s bid for the Republican nomination. […]