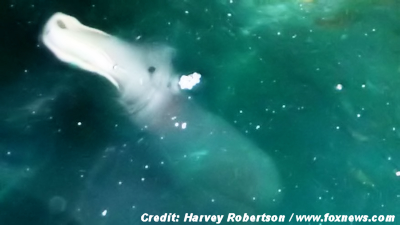 A Scottish tourist unwittingly captured an unidentifiable sea monster while vacationing in Greece.

Harvey Robertson was on a boat cruise off the coast of Parga, sailing through sea caves with his family. He was initially just trying to capture the unusual color of the surrounding water with his iPhone camera.

What he shot instead has baffled those across the Internet—and marine scientists. Looking back through his camera, Robertson saw that he had captured a grey creature that resembles an elongated manatee. The strange animal appears to pop out of the water in one photo, then disappears under the greenish water in the next. […]

[Another] Mysterious Creature Washed Up in Santubong | CRYPTOZOOLOGY NEWS