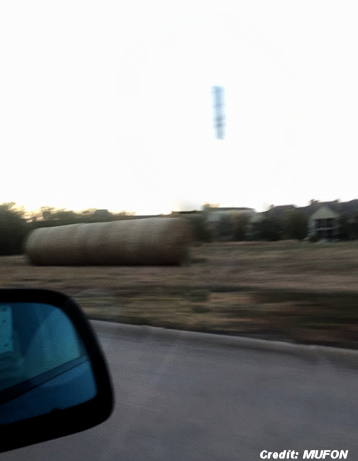 A Texas witness at Frisco reported that her 10-year-old daughter snapped a photo from their moving vehicle in the direction of an unknown bright light and later discovered a cylinder-shaped UFO, according to testimony in Case 71761 from the Mutual UFO Network (MUFON) witness reporting database.

The witness was driving south along Warren Street when her daughter took the photo.

“She wanted to take the picture because the light was so bright coming from that side, so she stuck her phone towards the window and snapped a picture,” the witness stated.“We quickly realized that that’s not where the (natural) sunlight was coming from.”

The child then looked at the photo.

“When she looked at her phone she noticed the object was floating to the right of us.”

The witness did not notice anything in the sky as they approached the area.

“Before we got to that area we could see the area in which the object was floating and nothing was there from a distance. Again, however, once we got close the lights seemed to be so bright coming from that area that she snapped a picture and she quickly looked at it. She noticed the object and showed it to us immediately.” […]

Scientists Describe UFO As Having a “Cylindrical Head With Two Balloon-Type Attachments, a Body, Hands and Two Legs”