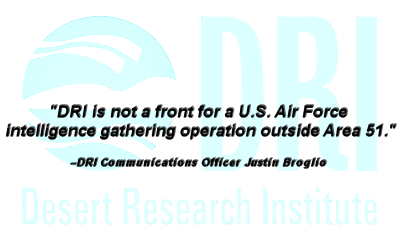 On Nov. 2, 2015, Glenn Campbell released a new video Area 51 “Weather Stations” – What Are They Really For?. On the same day, the Desert Research Institute (DRI) released a statement to KLAS-TV responding to the video:

DRI is not a front for a U.S. Air Force intelligence gathering operation outside Area 51. DRI serves as the nonprofit environmental research arm of the Nevada System of Higher Education.

The four stations where cameras installed were Rachel, Goldfield, Duckwater, and Ely. The cameras are only there as a check/reference to view the large digital readout signs along the highways in communities with poor cell phone coverage. The goal of those large signs is being able to provide public weather alerts as well as emergency messages using the CEMP stations as a communication hub. The cameras help CEMP make sure the large signs are displaying correctly.

The cameras and digital signs are not in any way associated with the CEMP. They are simply co-located on the site of the CEMP station and use the same communications infrastructure as the CEMP station.

Area 51 ‘Weather Stations’ – What Are They Really For? | VIDEO