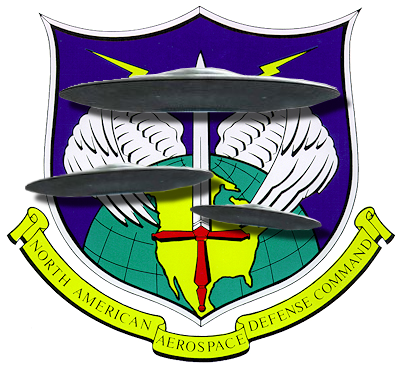 In recent months I have established that the North American Aerospace Defence Command (NORAD) have been, despite claims to the contrary, involved in the core “UFO phenomenon”. I have highlighted over a dozen pages of legally declassified and officially released US and Canadian military documents that show – in undeniable black and white – that real UFO events have come to the attention of, if not plagued, the staff and systems that make up the formidable NORAD behemoth. This documented evidence is only a sample. There are hundreds more. The first three posts in my series can be found here:

Even a swift look over the available information regarding NORAD and UFO’s, shows that most of it comes from the 1960’s and 1970’s. Almost nothing new has come directly out of NORAD, or its controlling command NORTHCOM, or any other US or Canadian military command whom have relations with NORAD, since about 1979. I say “almost nothing new” because there have been some exceptions which I will soon detail, but by-and-large the black hole of UFO information has been getting blacker, and very few UFO researchers have attempted to brighten it. And no wonder: Understanding NORAD’s structuring and capabilities is very difficult; grasping their inter-agency relationships with other military components is nearly impossible; and dealing with them is proving to be even harder still.

Before understanding the current situation regarding NORAD and the UFO phenomenon, I would like to briefly summarise a few things. For starters, NORAD is a “bi-national organisation” of the USA and Canada. Administratively, NORAD is heavily controlled by the USA’s Northern Command (NORTHCOM). However, being a bi-national organisation NORAD is not structurally sub-ordinate to NORTHCOM, but is more rather beside NORTHCOM, as well as woven into the fabric of the Canadian Armed Forces (CAF), especially the Royal Canadian Air Force (RCAF). As for NORAD’s actual capabilities and operational mission, rather than me trying to stitch it all together, I would much rather rely on a few of their own statements. For example, NORAD’s current on-line “fact sheet” states that they are charged with aerospace warning and aerospace control for North America, and, that:

“…Aerospace warning includes the detection, validation, and warning of attack against North America whether by aircraft, missiles, or space vehicles, through mutual support arrangements with other commands.”

Another official statement, this one as part of a press release regarding NORAD’s war-fighting and air defence role, states:

“One ongoing mission of the NORAD Battle Management Center is to coordinate ‘air sovereignty’ efforts, monitoring every aircraft that enter U.S. or Canadian airspace — some 2.5 million a year. NORAD is asked to investigate aircraft that do not file flight plans, contact ground controllers or identify themselves with transponders”

“As of February 2006, the NORAD database of two-line element sets (TLES) contains more than 56 million TLES for nearly 29,000 objects dating back to 1959… …the Space Surveillance Network (SSN) observes these objects for NORAD to maintain its catalogue. The SSN collects data using both passive and active instruments, then forwards the data to the NORAD Cheyenne Mountain Operations Center (CMOC) to be catalogued.”

To achieve the extraordinary feat of detecting, tracking and identification of aerial and space bodies over a huge fraction of the planet’s surface, NORAD’s physical assets are made up of an unbelievably complex mix of NORAD-dedicated sensors, as well as a huge flow of data from sensors operated by other military agencies. This blog post is not the forum to elaborate extensively on such systems, but to just give an example of each category, two reasonable examples to highlight would be the North Warning System (NWS) and the Joint Surveillance System (JSS). The NWS is a series of 15 powerful long-range early-warning primary radars which form a 3000 mile, or 4800 kilometre, wide “fence” running from the western edge of the US state of Alaska to Labrador, Canada. The system is tasked with the initial detection and accurate plotting of long range bombers or medium-range cruise missiles, most likely predicted to approach from Russia. Three far flung Regional Operations Control Centers (ROCC) receive raw data from the sensitive receivers for instantaneous activity and threat assessment, plus basic filtering, and the resulting information is transmitted to the NORAD Combat Operations Centre (COC). On the other hand, the JSS is a joint United States Air Force (USAF) and Federal Aviation Administration (FAA) system dedicated to monitoring both civil aircraft movements and military aircraft movements across most of North America. The JSS consists of long-range surveillance radars, chiefly operated and maintained by the FAA, but providing critical communication and raw radar data to both special FAA control centers, as well as three USAF’s Air Combat Command (ACC) Sector Operations Control Centers (SOCC), which in turn pass information to NORAD as needed.

Thus, it is established that NORAD – through its own systems, as well as seemingly everyone else’s – can watch airborne and near-earth space movements with an enviable degree of precision. But does any of this mean that NORAD actually detects and monitors UFO activity? ..And I mean our sort of UFO activity. No one would say that they do not detect and track UFO’s per se, because the core of NORAD’s mission is unidentified flying objects, and the process of identifying them. However, we, as researchers, are ordinarily interested in the type that can’t be identified. Ever. Since the dawn of the “modern era” of UFO sightings, witnesses to have described the most peculiar, sometimes startling, feats of movement and flight: unexpected deceleration, jolting changes in direction, unbelievable gains in altitude. Surely NORAD must routinely detect these oddities and process associated data for further analysis, just as they would when, say, inbound Russian fighter-bombers come calling? If the systems in place are so advanced, and unusual UFO activity is still on-going today, then NORAD’s classified records must be bursting with perplexing UFO events, plus associated investigations of such events by technical specialists and aerospace intelligence teams, must they not?

After years of studying this conundrum, it appears that it may not be that simple. NORAD surveillance systems, and systems run by other commands which feed data to NORAD as needed, usually have very finite and focused missions or “tasks”. For example, the USAF’s Air Force Space Command (AFSPC) operates the Space Based Infrared Satellite system (SBIRS) who’s satellites detect suddenly formed and fast moving infrared (IR) heat signatures that could correspond to the launch and flight of land based ballistic missiles. However, if the special detection and imaging software allowed all kinds of sudden and quick-moving IR sources (jet afterburners, mid-sized meteorite entries into the atmosphere, etc) to be left unfiltered, and thus appear on NORAD (as well as Strategic Command (STRATCOM) and other commands) display screens, then Early Warning/Detection Analysts, and even the Battle Staff, at NORAD’s Command and Control would become very weary indeed. In other words, such IR-scanning satellites could have something the size of a house right in front of them and no one would be any the wiser. Below is an image of the sort of synthetic display screen that functions year-in, year-out, at the NORAD Missile Warning Center at Peterson Air Force Base in Colorado. A keen eye will notice that the image I am showing here looks like it could be Russian missile launch and flight path region, it was some sort of graphics display test officially released for use in educational material. The bottom line: In this example at least, the all-seeing space-based system that would create the below missile tracking screen should potentially be capable of displaying “our” sort of UFO’s, but it is programmed not to want to. 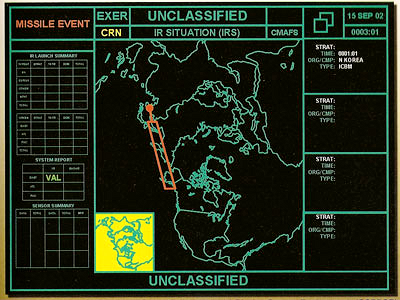 What about long and medium-range air defence radar? Again, it has become apparent to me that even these systems may very competently filter out the kinds of unidentified objects or odd phenomenon that so perplex us. Targets that are initially picked up but subsequently “lost” due to being weak or “intermittent” are eliminated from what is placed on the Air Combat Operator’s display screen; though, some systems may be set to at least allow a “track file” to be created on such a feeble target, but whether anyone is alerted, much less studies such data, is a different matter. Likewise, any targets that appear ridiculously large or intense can also be disregarded if the system operators so wish, and this means especially localised storm cells will go unseen, which is fair enough because that’s what the USAF Air Weather Service (AWS). Furthermore, although the details are classified, apparently some older NORAD-missioned radar networks will not plot targets that rapidly gain or decrease altitudes at velocities considered far beyond what manmade hardware can achieve; again, this rules out the types of alarming UFO events that so many witnesses have described. Then, on top of all this, any UFO events that are left in the system must be actually dealt with by humans. How many frontline personnel have simply missed the odd, short-lived event that may constitute the truly mysterious?

Having said all that, it is still abundantly clear that NORAD has dealt with the UFO matter with regularity and bewilderment. Some systems must be tripped by objects at times. My previous blog posts in this series are testament to that, and nothing can change the fact that there exists in the public domain hundreds of documents that catch NORAD, or NORAD-associated commands, out. Sometimes it’s the simple stuff that is so telling. For example, what other possible explanation is there for this? Released to Robert Todd under the FOI Act, a NORAD Director of Operations message, referenced as “NORAD/DO/131617Z Nov 75”, stated:

“There have been a number of recent reports citing observations of unknown objects. These observations make it advisable, at least for the time being, to record these observations and forward them to this headquarters. NORAD/DO Form 17 will be utilised even though such observations did not result in track establishment. Entries in NORAD/DO Form 17 will be used where appropriate in order to standardize the information for review and summary. Unknown object information will be forwarded in the same manner as for reporting unknown tracks (see NORAD Reg 55-99, Volume 7).”

So, again, we see NORAD – the Director of Operations (NORAD) no less – discussing UFO’s. In this example, they are not only taking note of “recent reports citing observations of unknown objects”, but details of such are being filled on top-shelf reporting forms and transmitted to the Operations are of NORAD Headquarters.

In my next blog post in this series I will begin detailing the latest developments in regards to actually tackling NORAD directly. This will be a very long process. Much has been discovered. And much remains as mysterious and frustrating as ever.