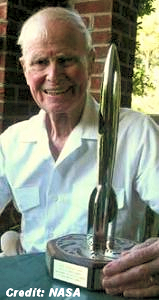 Frederick C. Durant, III, the former Assistant Director for Astronautics of the Smithsonian’s National Air and Space Museum and one of the world’s foremost authorities of spaceflight and rocketry, died on October 21, 2015, in Mount Dora, Florida, at age 98.

Other aerospace positions he held were with Arthur D. Little, Inc., at Cambridge, Massachusetts, and the Avco-Everett Research Laboratory at Everett, Massachusetts. He was also a consultant to the Department of Defense, Bell Aerosystems Co., and other companies and organizations, including the Central Intelligence Agency (CIA). Mr. Durant was likely among the first rocket/missile/space analysts for the agency and, in 1953, was among the participants on the Robertson Panel that investigated UFOs. The Robertson Panel, under the direction of Caltech and Princeton University Professor Howard P. Robertson, issued their findings within the much larger report that was orchestrated by Mr. Durant. The report is known as the Durant Report. […]