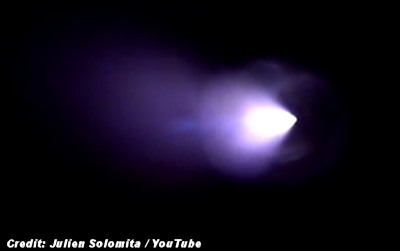 An unannounced Trident missile launch lit up the skies over Los Angeles on Saturday night, setting off a hail of UFO reports, tense tweets and YouTube videos.

After the flare-up, the U.S. Navy confirmed that the USS Kentucky, an Ohio-class ballistic missile submarine that’s homeported at the Bangor submarine base on the Kitsap Peninsula, conducted a “scheduled, on-going system evaluation test” in the Navy’s Pacific Test Range off the coast of Southern California. The missile was not armed, the Navy said in its statement.

It’s typical for the Navy to refrain from announcing Trident test launches in advance, but it’s definitely not typical for the launch to be witnessed by millions of people in one of the nation’s most populous regions. […]