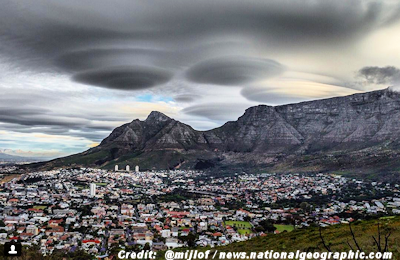 Social media users in Cape Town, South Africa, posted photos over the weekend that call to mind classic alien invasion movies. The pictures feature eerie, saucer-shaped puffs that seem to hang over the sky like UFOs.

But these so-called “UFO clouds” are nothing to fear.

Meteorologists call them lenticular clouds, which form when strong, moist winds blow over rough terrain, such as mountains or valleys. Picturesque Cape Town is framed by such features, including the 3,500-foot (1,066-meter) Table Mountain. […]