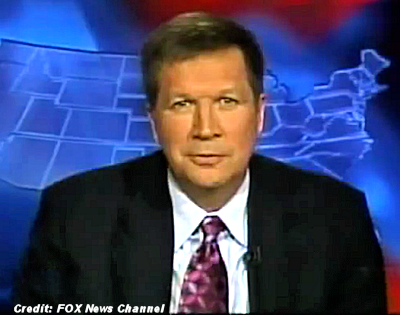 If you believe the truth is really out there—and you also want to keep taxes low on the rich—here’s your candidate.

During the period between his 18 years in Congress and his two terms as Ohio’s governor (2011-present), GOP presidential hopeful John Kasich hosted “From the Heartland,” a Fox News show where he discussed a variety of social and political topics with guests. The show aired from 2001 until 2007 and in February of that final year, Bill Nye the Science Guy and David Sereda – a UFO activist and the director of a 2005 documentary called “Dan Akroyd Unplugged on UFOs”– were on the show to discuss a “Heartland Special Investigation into UFOs.”

The intro featured shaky footage of flickering lights in the sky that were purported to be UFOs. As ominous 1950’s-era UFO movie music played in the background, reporter Janice Dean said, “UFO sightings seem to be on the rise,” referring to a highly-publicized UFO sighting that had recently occurred over Chicago’s O’Hare International Airport. “But it seems the public still wants to know the truth,” she said. “Do UFOs exist? You decide.”

Kasich then introduced his guests and let Sereda talk about his “exclusive” footage of alleged UFOs over Lake Erie. After Sereda talked about the footage, Kasich jumped back in.

Nye could barely conceal his contempt. […]