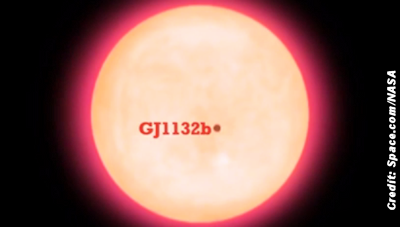 A newly discovered planet 39 light-years away is being called the closest Earth-size exoplanet ever discovered — and a potential “Venus twin” — providing the mouth-watering opportunity for a close-up look at the environment on a rocky alien world.

One of the dire frustrations of studying planets around other stars (and, really, any astronomical object) is their distance from Earth, which makes it onerous or impossible to get many basic details about them. Exoplanets are doubly frustrating because any light they emit (light that would give hints about what’s happening on the surface) is often overwhelmed by the light of the parent star.

But the new planet, called GJ 1132b, is only a cosmic stone’s throw from Earth, orbiting a fairly dim star, and appears to be a rocky world with an atmosphere. And while its surface temperature indicates that it may have more in common with Venus than Earth, it is so perfectly primed for Earth-based studying, that astrophysicist Drake Deming hailed it as “arguably the most important planet ever found outside the solar system.” […]

Detection of Light Bouncing Off An Exoplanet—A First!