New images have emerged of the strange light which was according the Navy an unarmed missile (which is normally armed with a nuclear warhead) Trident II missile test over the California coast last saterday, showing fascinating new details about the Missile which seems to explodes after its blasted by a UFO. 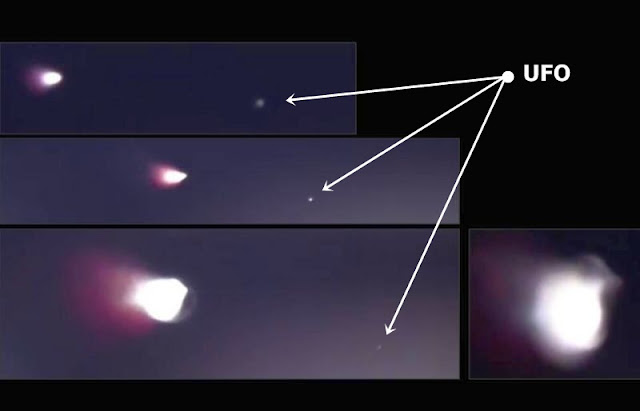 Credit: Images from the second video posted by Scott Shaubel on his Facebook page.

Started as a fireball, the missile coming over the ocean, reflecting off the water and showing heat distortion when suddenly a UFO approaching the missile which explodes after its blasted by the UFO leaving it for the next 5 minutes as a glowing expanding gas cloud radiating down to the surface and leaves a blue cloud in the sky for 10 minutes. Remarkable, no sound was heard during the explosion.

But did they just tested a Trident II missile and it exploded due to the intervention of a UFO?

According to an article posted on SteveQuayle’s website the launch of the missile was part of a space program in order to test a laser beam technology.

The following text is an extract from the article:

Based on what I witnessed with the bright white beam of light encasing a blue beam, followed by apparitions in the sky I did some research. I believe that what happened is connected with Space acquisition, especially in light of a perceived China threat.

Fears of China shooting down our important satellites coupled with rising tensions between our country, China and Russia would be the impetus for fast actions to carry out what General C. Robert Kehler of US Air Force Space Command wanted to do back in 2009, which was a 3 phase acquisition of Space. Read page 3 http://www.afspc.af.mil/shared/media/document/AFD-091207-037.pdf

Laser beam technology is a part of this and if you read the article, you will see that a military missile launch is involved in measuring an “enormous energy surge (plasma discharge) emanating from the SLAC National Accelerator Laboratory located in Menlo Park, California.

They deal with laser beam technology. What I saw involved 2 huge beams of light, a huge white beam and a blue beam which was followed by an odd display in the sky of multiple explosions creating replicating cloud (or plasma) forms.

The next two videos show the missile after it’s blasted by a ‘UFO’ laser beam technology.

You can see the second video on Scott Shaubel’s Facebook page He posted the video on November 8, 2015.

The last video is an interesting report from August of this year and is titled ‘the Battle Above’ and it explains everything related to the ongoing space war.