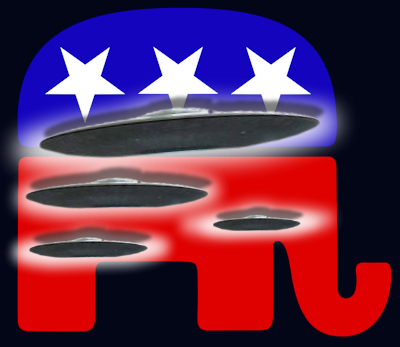 Dude, what’s up with Mother Jones? For the third time in seven months, reporter A.J. Vicens has gone UFO and nobody’s revoked his press badge. What gives?

The latest offering comes just hours before tonight’s Republican presidential contender soiree in Milwaukee, under the headline “The Debate Is Over. This Is the Best Candidate for UFO Disclosure.” Never mind that the headline doesn’t square with the copy. Vicens managed to find and post an eight-year-old clip from John Kasich’s days as a Fox News host for a segment called “Heartland,” in which Kasich refereed a lame excuse of UFO debate. It pitted Bill “The Science Guy” Nye against New Agey author David Sereda, whose Facebook page says he “Studied at University of the Universe.”

Kasich never volunteered an opinion one way or the other on UFOs during this seven-minute segment, but what the hell, man, the door’s wide open now, let’s drag the Ohio guv into The Great Taboo the same way Tim Russert dropped a bomb on Dennis Kucinich during the Democratic primary debate in 2007.

The fact that Kasich had the gall to even schedule a discussion on UFOs suggests some deviant character flaw that Fox Business Network panelists need to take a good hard look at tonight; after all, Kasich soiled the Fox brand on their parent company’s schedule. And while we’re at it:

What do you suppose Trump is covering up? Will someone ask The Donald about those UFOs tailing his helicopter in broad daylight at the Iowa State Fair in August? UFOs flirt with me, they always have, what can I tell ya, some of my best friends are UFOs, if they weren’t UFOs I’d probably be dating them …

Anyhow, larger point: Just last month, Vicens wrote another MJ piece about a group of scientists – UFODATA – hoping to establish a network of tracking stations to detect and record anomalous activity in our atmosphere. This doesn’t sound very traditional Mother Jones to De Void. And in April, taking his cue from a tweet dispatched by longtime Clinton insider John Podesta, Vicens uncorked yet another one, under the banner “ETs for Hillary: Why UFO Activists Are Excited About Another Clinton Presidency.” He built it around an email knee-slapper reply from Hillary’s staff, which had not yet committed to a 2016 White House run: “Our non-campaign has a strict policy of not commenting on extraterrestrial activity. BUT, the Truth Is Out There.” Clever.

The truth, of course, is that Hillary does have a few UFO cards she’s not playing, and if the House Select Committee on Benghazi was really interested making her squirm, it should’ve asked about the former First Lady’s discussions with the late philanthropist Laurance Rockefeller and former White House Science Advisor John Gibbons. Maybe put retired CIA bigwigs Robert Gates and Chase Brandon under oath, or subpoena Webb Hubbell and get the former Justice Department official to quit being such a sphinx. But that’s really up to the press now, isn’t it? Maybe, if Mother Jones – or anyone else, for that matter – decides to actually invest aggressive reporting into The Great Taboo, the political intrigues spanning this issue for decades will give partisans on both sides of the aisle something vastly more interesting to howl about. Props to Mr. Vicens for trying to do something different. But what’s the plan?