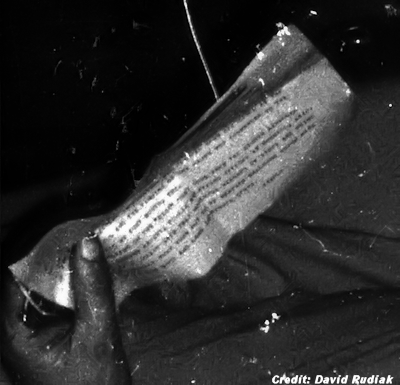 There has been some discussion that suggests our research into the Ramey memo has been accomplished behind closed doors in a manner similar to the way the Not Roswell Slides were investigated. While we certainly did arrange with those at the University of Texas – Arlington to make new scans of the negative, it was not for sinister purposes. Arrangements, which including several experts in forensic photography who donated their time, were difficult to make in all came together in April of 2015. They spent several long days preparing to make the scans, accomplishing that work, and ensuring that there were no other tests to be done. They then returned to their home bases to make additional observations using the scans they made. Some of the digital files were nearly 250 MB in size, yes 250 megabytes.

It had been hoped that the latest techniques would produce immediate results. Such was not the case. The analysis has not reached any universal conclusions so that little has been said about all of this. Several people, some on the skeptical side of the fence, Lance Moody being one, have been given copies of the scans to see if they can come up with a way to read the memo in much the same way that those working with the Roswell Slides Research Group had done.

There is a journal article that is nearly finished. It lacks the conclusions which, if they are negative, meaning the issue has not been resolved, might not find a publisher. If we had positive results, meaning the memo could be read then a publisher could probably be found… I will note by positive results, I refer only to success in reading the memo and not about the content of it.

However, this process is going slower than any of us expected. Given that, we decided to publish here one of the better scans to see what might be seen by others. As I say, some of the files are gigantic…

We still have a copyright issue, so for all intents and purposes, the copyright of this particular image is protected and cannot be published elsewhere without permission from us and the University of Texas – Arlington. It doesn’t mean that researchers can’t share it with one another, it just means it can’t be published anywhere including on the Internet without permission.

Roswell Ramey Memo and ‘Victims of the Wreck’