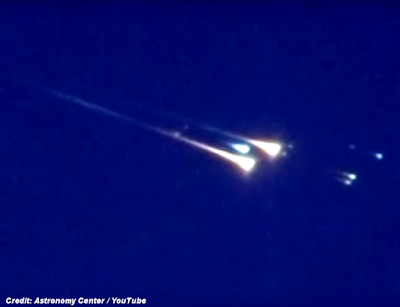 Update: Whatever WT1190F Was, It Isn’t Any More

This morning, just before 06:20 UTC and right on schedule, a small bit of space junk called WT1190F slammed into Earth’s atmosphere at nearly 40,000 kilometers per hour. The huge pressure generated as it plowed through the air heated it up, broke it to pieces, and it disintegrated.

We’re still not sure what it was, other than it was likely a piece of hardware from an earlier mission to the Moon. But we know for a fact it burned up: We have pictures!

The photo at the top was taken by a joint aircraft mission sponsored by the International Astronomical Center and the United Arab Emirates Space Agency. They were flying over the thick clouds covering the Sri Lanka coast and were able to get some pretty amazing shots of WT1190F as it came in. Here’s a brief video featuring a short animation and some of the photos:

UFO to Crash into the Indian Ocean