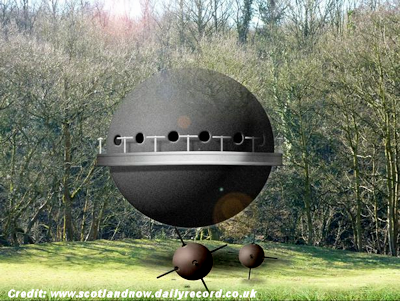 SCOTLAND has been home to a remarkable number of UFO sightings over the years and there are hundreds of reports about mysterious objects over the nation’s skies each year.

It was 9 November, 1979 when forestry worker Bob, 61 at the time, had his walk interrupted by a large grey shimmering orb, 20ft in diameter and 12 ft tall.

As he watched, two spiked spheres rolled towards him, grabbed his trousers and pulled him.

When Bob arrived home, ashen-faced and with ripped trousers, he immediately told his wife he was the victim of a bizarre alien attack.

“Bob was a very down to earth, honest man,” recalls Scotland’s UFO expert Ron Halliday, who has written several books on alien encounters. “He stuck by his story, never embellished it and was very believable.”

Police believed something strange had happened. To date it is the only time an alien sighting has formed part of a police investigation. […]