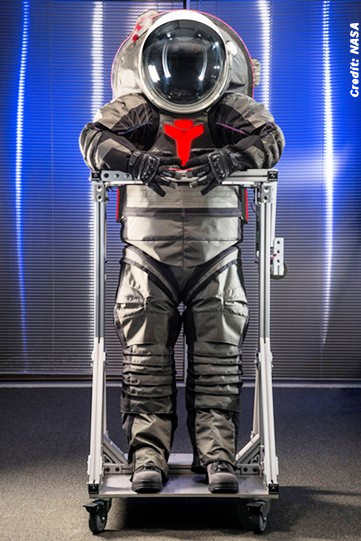 Unless you’ve been living off the grid, you probably know that NASA is supposed to have humans land on Mars by the 2030s. That may seem like a long way off, but NASA is actually about to start recruiting astronauts for the Mars mission and scientific-types have been working on the spacecraft that will actually take the astronauts to the red planet for years. We don’t know who will be chosen or exactly when they will actually touch down on Mars, but we do know what they’ll be wearing.

But these won’t be any old spacesuits. After years of the same old white extravehicular mobility outfits, NASA has gotten snazzy with the Tron-inspired Z-2 spacesuit. The space agency just released photos of the Z-2 prototype last week and the photos show black and gray suits with sleeker lines that look like outfits astronauts will actually be able to move around in.

In fact, the Z-2 was designed to offer a lot more mobility than earlier styles of spacesuits (the ones that made the astronauts look and move like the Marshmallow Man from “Ghostbusters”) because the astronauts that wear these suits will be using them to explore a foreign planet and won’t be worn aboard the spacecraft or to conduct spacewalks or anything like that.
The suit is designed for maximum astronaut productivity on a planetary surface – exploring, collecting samples, and maneuvering in and out of habitats and rovers, according to a NASA release. […]