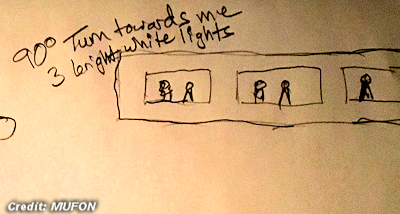 A Minnesota witness at Olivia reported a close encounter with a low flying missile-shaped object that was so close that craft occupants could be seen behind rectangular-shaped windows, according to testimony in Case 72323 from the Mutual UFO Network (MUFON) witness reporting database.

The witness was driving home from Minneapolis and stopped in Olivia at a Dairy Queen and the continued driving west along Highway 212.

“When I looked out the passenger side window to the north, I noticed what at first I thought was a small airplane flying just above the tree line,” the witness stated.“I looked again and noticed the windows were too large to be airplane windows.”

The witness could not see the traditional red or green flashing aircraft lights that a small airplane would have.

“There were long rectangular windows in which I could see people standing and looking out. I grabbed my camera and tried to take a couple pictures. The craft then made a sharp 90-degree turn and headed toward me. On the front I saw three bright lights.” […]