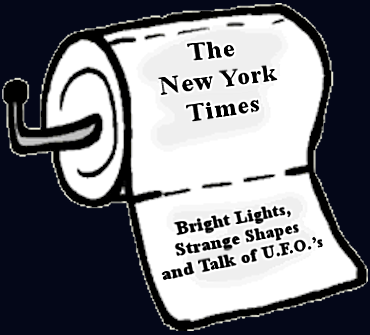 Lapdog journalism at the NY Times

God, how I do so hate reading the pablum that passes for UFO coverage in The New York Times. Had a link to its latest trifling not appeared on a Facebook post over the weekend, I might’ve been lucky enough to have missed the thing altogether. The headline – “Bright Lights, Strange Shapes and Talk of U.F.O.’s” – should’ve been sufficient warning to take a pass. But NOOOO. De Void just had to click and see and hope against hope that just once The Gray Lady might serve up an original recipe on The Great Taboo. Just once. Please.

So now the question I’m asking myself is why? Why did I do that? Which particular character flaw drove me to click onto something whose outcome was as preordained as a Wile E. Coyote canyon disaster? I want to blame it on something beyond my control, e.g., the rush of communications technologies currently reducing civilization’s attention span to a debris field of autonomic impulses. But the inner voice tells me to man up, to take responsibility and own it.

De Void refuses, however, to link to this banality. That would be wrong. Likewise, De Void declines to rain on reporter Jonah Bromwich because maybe it wasn’t his idea. Maybe it got dropped on his plate by a harried editor who needed to plug a hole quickly and reached for the first thing in the pile. In this case, it was the Nov. 7 sub-launched missile test off the nighttime coast of California. Lots of surprised people posted dramatic footage, which prompted CNN to lead its next-day coverage this way: “Panic and speculation spread Saturday night when a bright white light shot through the night skies in Southern California …”

When I think of panic, I tend to think of people trampling each other to get away from gunfire and explosions, or diving out of skyscrapers to escape roaring flames, but whatever, if CNN says panic, it must’ve been true. CNN also mentioned how the launch triggered “theories of aliens,” as did countless other newsgatherers. Anyhow, five days later, here comes the nation’s unofficial paper of record, bringing up the rear with this lead: “When strange things appear in the sky, many people can’t help but turn their thoughts to extraterrestrials. But there’s usually a more down-to-earth explanation.”

A lead like this makes De Void practically vomit with excitement.

Brownstein goes on to reassure readers that we’ve simply been conditioned to attribute murky lights in the sky to space aliens, thanks to cultural cues like “Close Encounters” and “The X-Files.” Which is refreshing; nobody’s ever heard that explanation before. Then he gives the final say to Skeptic magazine publisher Michael Shermer: “In a way, extraterrestrials are like deities for atheists. They’re always described as these vastly superior, almost omnipotent beings coming down from on high, very much like the Christ story, or the Mormon story or the Scientology story.”

This is a tired and tiresome complaint, but the longer the Times keeps covering UFOs this way, the more exposed its amateurish vulnerabilities on this topic become. Maybe it’s part of the enduring legacy of its late iconic science reporter Walter Sullivan. In 1969, Sullivan wrote the laudatory introduction to the so-called Condon Report, the seriously flawed government-funded analysis that sounded the death knell for critical institutional thinking on UFOs. Try to imagine the prestigious Walter Sullivan Award for Excellence in Science Journalism going to reporters investigating an issue he attempted to lay to rest half a century ago.

Descendants of that storied tradition, Bromwich and/or his editor are just wasting space and undercutting the Times’ reputation as All The News That’s Fit To Print. Of course it would never occur to them to raise questions about why U.S. Customs and Border Protection is stonewalling efforts to authenticate UFO footage it shot with its own camera, or to press the Federal Aviation Administration on why it began exempting raw radar records from FOIA requests nearly a decade after 9/11 allegedly changed everything. But it does make you wonder how long they can afford to ignore the numbers. Google “UFO” and 86.5 million returns pop up. For readers looking for an intelligent forum on The Great Taboo, The New York Times isn’t even embarrassing. It’s irrelevant.

“…The Pathetic State of The Mainstream Media’s UFO Coverage”

The Missing Times – News Media Complicity in the UFO Cover-up