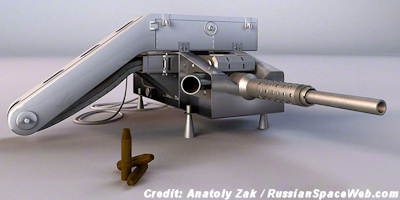 In 1975, the USSR actually fired a cannon from an orbiting space station. Forty years later, we finally got a good look at this gun.

A quarter of the century after the end of the Cold War, the only cannon that has actually fired in space finally comes to light.

Installed on the Almaz space station in 1970s, the R-23M Kartech was derived from a powerful aircraft weapon. The original 23-millimeter cannon was designed by Aron Rikhter for the Tupolev Tu-22 Blinder supersonic bomber. That gun is relatively well known. However, its space-based cousin had largely remained in obscurity. […]

Secret Inventions on the Rise