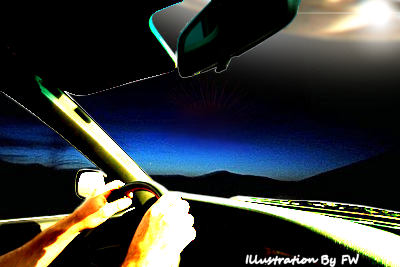 A Florida witness at Miami recalled events from 1997 when a disc-shaped UFO hovered above the family car on their driveway and paralyzed both he and a neighbor, according to testimony in Case 72326 from the Mutual UFO Network (MUFON) witness reporting database.

The reporting witness was 12 years old on December 24, 1997, and a neighbor was a few years older.

“It was Christmas Eve and we were sitting on top of my mom’s beat up Oldsmobile on the trunk leaning up against the back windshield looking up at the sky,” the witness stated.“We were talking while our parents and family were inside enjoying the party.”

The neighbor noticed a red light that he thought was shining from inside the car.

“He was surprised that she had placed an alarm on such a beat up vehicle that wasn’t even able to run. At that moment as we were both looking inside the car he turned around and froze while staring up at the sky.”

The witness tried to speak to his neighbor, but the young man was not reacting.

“At that moment I looked up above us and realized that the red light was in actuality a reflection of a giant craft hovering above us. The object was smaller than the roof of my family’s four-bedroom house, but larger than the car we sat atop. I would estimate it was around 20-30 feet long and circular in shape. A dull gray-colored saucer now hovered over us with a red circular light that shined down upon us.”

The witness said the saucer-shaped object was close enough that he could have stood up on top of the car and touched it. […]