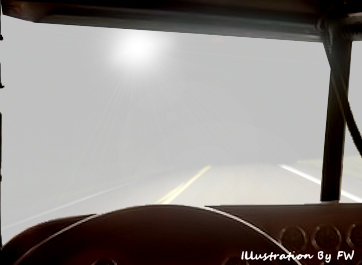 Back when you couldn’t ignore it …

A little after 1 a.m., on Nov. 3, 1957, truck driver James Long was heading east out of sleepy Levelland, Texas, when he noticed something dark and huge and weird straddling the highway ahead. Long closed to within less than a football field of the mystery roadblock when it suddenly flared its lights, a move that simultaneously killed the engine of Long’s rig.

Oval-shaped and maybe 200 feet long, the enigma began to rise with a roar as Long stepped out to get a better look. At that point, he momentarily blacked out; upon regaining his bearings, he noticed thing was hovering about 200 feet above him. Then it went dark again, as if it never existed. But his vehicle was working again – and Long high-tailed it back to town to inform authorities. But the law was way ahead of him.

Police, sheriff, and highway patrol units were already on the lookout for what motorists and local residents were describing not only as major UFO activity near and above area roads, but as the cause of electrical failure for vehicles in the immediate vicinity. Even the fire marshal’s engine began to sputter. In fact, the sheriff and his deputy reported an object that emitted a 50-yard wide beam of light before going dark in a snap of the fingers. And the activity was apparently regional, as witnesses from the east Texas burg of Farmington all the way west to the military base at White Sands, N.M., reported UFO encounters in the wee hours of 11/7/57. In a nod to the USSR’s just-launched Sputnik mission, the unresolved mystery was nicknamed Whatnik.

Whatnik – which created engine failures in at least eight vehicles – is obviously an old story. What’s new is that old story’s accessibility, and the accompanying anthology of literally hundreds of other Cold War cases. Drawn from original newspaper, magazine, military and civilian reports, “every UFO book available,” and collections from the likes of crusading atmospheric physicist Dr. James McDonald, this online collection at the Sign Oral History Project is the culmination of a lifetime’s work from veteran researcher Loren Gross.

Recently digitized by Tom Tulien with the Sign Oral History Project, Gross’s archives constitute more than a simple data dump. Combined and compressed into such tight chronological structure that it reads with a timeless urgency, this is a massive library that has laid primary-source foundations for so many historians looking to put UFOs in context. Borrowing on a phrase from University of New Mexico astronomer Lincoln La Paz concerning their potential for revelation, Gross calls his narrative “UFOs: A History/The Fifth Horseman of the Apocalypse.” It was completed in 2005 and circulated exclusively among a small clique of researchers.

“Remarkably,” Gross states in his introduction in comparing military accounts with civilian accounts, “there is very little overlap aside from well-known incidents. The Air Force explanations are a joke and I paid little attention to them. Having reviewed tens of thousands of sighting reports, I did not use every case while compiling the UFO histories – only the ones I thought were the best.”

A joke indeed. In a verdict that rendered the USAF a laughingstock to the residents of Levelland, the Pentagon kissed off the 11/3/57 incident this way: “Weather phenomenon of electrical nature, generally classified as ‘Ball Lightning’ or ‘St. Elmo’s Fire,’ caused by stormy conditions in the area, including mist, rain, thunderstorms and lightning.” Nevermind that the skies over Levelland that evening were relatively clear that evening, that not a drop of rain fell on the west Texas town during the event, or that some of these split-second “ball lightning” incidents elasticized for three to four minutes.

“Reading Loren Gross’ almost continuous narrative is like eating pistachios,” Project 1947 director and collaborator Jan Aldrich states in an email to De Void. “Once you start, you can’t stop.”

Spot on analogy. You can point and click just about anywhere in Gross’ monographs and find a surprise. The collection starts with the so-called “airship wave” of 1896 and concludes seven decades later, in 1963, just before the Betty and Barney Hill UFO abduction experience injected a formidable level of subjectivity into the controversy. For sheer drama, Aldrich suggests new readers first hop the time machine back to a single night in 1952, July 22-23, in the midst of a nationwide flap involving jet-fighter scrambles, when it appeared as if air corridors from Virginia to New England were being deliberately tested for response capabilities. It almost has a cinematic quality.

This stuff matters today because those were the halcyon days, only nobody knew it. Back then, the federal investigation of UFOs was obliged to pay lip service to transparency, even at the expense of its credibility, like the ball-lightning snow job on Levelland. What a difference half a century makes.

As recently as 2005, the CIA was resisting, in federal court, a Federation of American Scientists lawsuit to disclose its secret budget – from 1963. Really. The FAS merely wanted verification of its independent analysis that the spooks’ budget 42 years earlier was $550 million. Today, 2015, without the existential threat of the Soviet Union, America’s black budget is nearly $60 billion and growing. Federal agencies routinely classify even the most innocuous information, because they can, and 4.5 million Americans hold security clearances. That’s more than the combined populations of the Northern Marianas, American Samoa, the U.S. Virgin Islands, Guam, Wyoming, Vermont, the District of Columbia, Alaska, and both Dakotas. And not a one of these vetted employees is required to look stupid by making excuses for the elephant in the room.