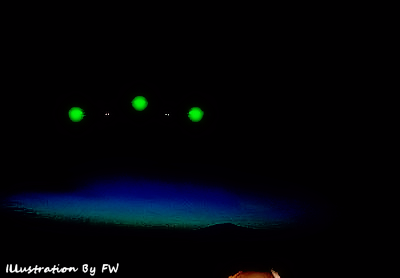 An Ohio police officer at Campbell reported “several green lights” that could not be identified about 7:50 p.m. on November 3, 2015, according to testimony in Case 72154 from the Mutual UFO Network (MUFON) witness reporting database.

“While working in the capacity of a police officer, myself (Detective Sergeant) and two other officers (both K-9 officers) witnessed several bright green lights in the sky,” the witness stated.“While standing on Wilson Avenue and Snyder on the boarder of Campbell and Struthers, Ohio, witnesses observed two triangular-shaped objects in the northwest sky.”

Witness B was the first to notice them and advised the other two witnesses.

“All looked to the northwestern sky to see two seemingly equilateral triangular-shaped objects with lights at each angle. The lights appeared to be an unwavering bright lime-green, with one light forward and the other two in the rear. Due to the limited amount of stars in the night sky, witnesses were unable to determine at this time if the objects were solid or not.”

The witness described the objects as another object approached.

“The two triangular objects were traveling at a very low speed from northeast to southwest. The two objects were also traveling very close together. At this time the two objects had crossed over the Wilson Avenue reference point when witnesses observed a single, lime-green in color, orb-like object following the same flight path, but seemingly lower than the other two.”

The objects continued to be tracked by the witnesses.

“At this time the two triangular-shaped objects further crossed the Mahoning River reference point, and began to spread out. The lead tip light stayed slightly ahead while the two rear lights moved up and further apart, causing an almost straight-line appearance. The lone orb-light object still trailed in the same flight path and slow speed.”

As the object flew farther away, the witnesses retrieved a pair of binoculars to view the objects.

“All that could be observed were the lime-green lights, no structure or other characteristics. The objects were observed in the same almost straight-line pattern until they traveled so far that they could not be viewed with the binoculars.” […]