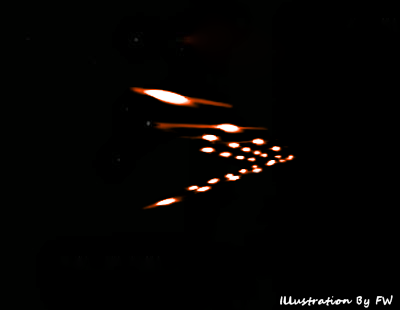 An Arizona witness at Tucson reported watching a group of about 20 copper spheres moving rapidly north to south about 30 feet off of the ground that appeared to change color, according to testimony in Case 72636 from the Mutual UFO Network (MUFON) witness reporting database.

“A group of gray to copper forms was observed at approximately 30 feet altitude,” the witness stated.“The forms were in a V formation and moved quickly, silently and unwaveringly from north to south. We observed for approximately 10 seconds.”

“Shapes changed from ovoid to spherical while maintaining V formation. The individual forms were approximately three feet across. At first the color was a dull gray and shifted to a reflective copper. There was a churning motion within the formation with individual spheres rotating from the outer part of the formation to the V.”