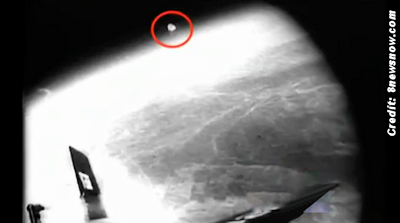 The global reputation of Nevada’s Area 51 military base has meant that the Silver State is a magnet for UFO enthusiasts.

Thousands of people travel to Nevada each year to look for weird objects in the desert skies.

But the history of the UFO phenomena in Nevada extends far beyond Area 51. A new book is out which details hundreds of strange encounters with unknown objects and a creature of two.

The incidents listed in the book are not so easily explained. They’ve been reported dating back more than a century by credible witnesses from all walks of life.

In the early 1960s, the X-15 rocket plane flew higher and faster than anything on earth, or so we thought.

“A different pilot saw six objects this time, described as white or silver and they took up a formation around his plane, way, way up there, so clearly these are not ours, if they are doing things that we can’t do. This was a high altitude test, higher than we’ve ever gone,” said Preston Dennett. […]