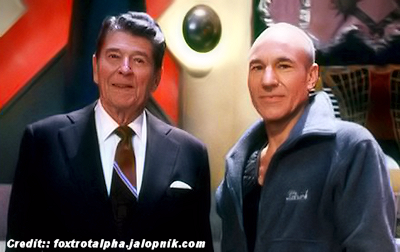 Ronald Reagan was a fan of Star Trek—and even a critic of it sometimes. In his diary he talks about watching Star Trek III in the White House theater and how he thought it sucked. In his post-presidential years apparently this interest in the franchise continued, and in 1991 he visited the then-highly popular Next Generation Set.

The Gipper’s attendance at Paramount Studios Stage 8 came as the cast and crew were filming the season four Klingon-centric two-part finale, Redemption. There were Klingons running around everywhere, to which Reagan supposedly noted “I like them, they remind me of Congress.” […]