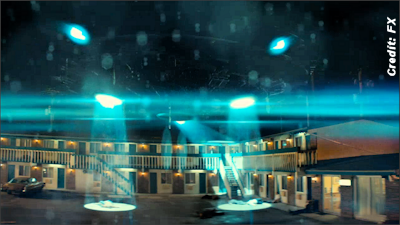 “You want to create a story that plays into that other Coen Brothers theme — which is, ‘Accept the mystery,'” explains the Golden Globe nominee.

“It felt like that territory was open to me,” Hawley says of the UFO that appeared to hover over the hotel parking lot bloodbath in “The Castle.” “Last year, fish fell from the sky. The fun thing about having a show that starts out with ‘This is a true story,’ is that there’s this mindset where you get to play around with the fudge-ability of what’s real and what’s not. You also want to create a story that plays into that other Coen Brothers theme — which is, ‘Accept the mystery.'”

That particular mystery isn’t likely something that will be further explored in the Dec. 14 finale. (Hawley says that Dunst’s character Peggy summed it up best with her assessment of the situation: “It’s just a flying saucer, hon, we got to go.”) Either way, he says it’s something that fits thematically with the time period. “In the year or two after Star Wars and Close Encounters came out, and after Watergate, a lot that late-70s paranoia involved this feeling of being watched and not being able to even trust the skies,” he added. “At the same time, Joel and Ethan [Coen] included a bunch of that imagery in The Man Who Wasn’t There.” […]

What Do Those Aliens On Fargo Really Mean?