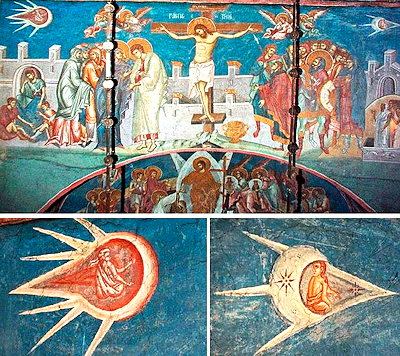 “We can now anchor the beginning of the UFO phenomenon into real, documented history.”

The story of Christmas began when three wise men saw something strange in the sky and decided to investigate.

Anyone who’s seen a UFO can easily relate to what those wise men might have been thinking, and that’s what makes the images in these paintings so compelling.

Many unusual aerial objects depicted in paintings between the 14th to the early 18th century look, at first glance, like modern-day UFO sightings.

It’s easy to wonder why artists of those long-ago centuries seemed obsessed with including these curious objects in scenes surrounding the stories of the birth and death of Jesus Christ.

The first example (above) here is a wall mural, or fresco, from 1350, “The Crucifixion,” artist unknown, in the Visoki Decani Monestary in Kosovo, Yugoslavia. Two odd-looking objects with “pilots” can be seen in the sky on both sides of Jesus. […]