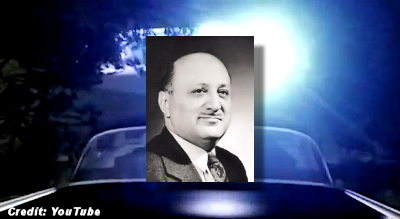 I frankly didn’t expect to get a lot of response to my posting of December 23, Dr. Simon Reveals his Real Thoughts on the Hill “UFO Abduction” Case. I scanned and posted a 48-page PDF of old letters and documents related to the case, most of them about 40 years old. In a sense, it did not reveal anything new, but merely added more detail to what we already knew: Dr. Benjamin Simon, the Hills’ psychiatrist, did not believe their story of having been abducted on board a flying saucer. I wrote about this as far back as 1981. It was also in my book UFO Sightings, published in 1998. Indeed, if you go all the way back to The Interrupted Journey (1966), the book that started it all, we find Dr. Simon saying [chapter 12] that he found the most tenable explanation for the abduction story to be that the dreams of Mrs. Hill had “assumed the quality of a fantasised experience.” In very diplomatic terms, he is saying, “I don’t buy it.” So the fact that Dr. Simon did not accept the abduction story is not exactly news, or at least it should not be to anyone carefully following both sides of this controversy. (We all know how few people that is.)

I realized that this ran counter to what Kathleen Marden, Betty Hill’s niece and heir to her celebrated Saucer Story, was saying. What I didn’t realize is how fiercely invested Marden is in preserving the illusion that Dr. Simon accepted all of the Hills’ account as being factual, including the abduction story.

On December 26, Marden wrote on her Blog, “Debunkers at it Again.” In it she says:

I received an email message from Andre Skondras on Christmas day informing me that debunker Robert Sheaffer, an associate of Philip Klass and longstanding member of CSI (formerly CSICOP) , had found a never before published letter allegedly written to Klass by Dr. Benjamin Simon. The letter dated March 1, 1976, was mailed by Klass to Betty in 1988. It spoke of Dr. Simon’s intent to “give the true story of the Betty and Barney Hill affair.” It is our opinion that Dr. Simon would not have stated that his untested, unproven conjectures were the truth. He was circumspect and professional in voicing his opinion. The intentions voiced in the letter would have been a violation of his contract with John Fuller and a violation of doctor-patient confidentiality.

Of course, that confidentiality had already been breached, with permission, by the entire commercial enterprise exploiting the Hills’ account, including John Fuller’s 1966 book The Interrupted Journey, and by 1976 the NBC-TV movie dramatizing their account, The UFO Incident. Once a story gets that far out into the public eye, and questions arise about its interpretation, you can’t claim that further discussion constitutes a “violation.” Once the Hills’ sessions with Dr. Simon have become pillars of support for the pro-UFO abduction argument, you can’t release that information selectively.

But there was something in that letter even more upsetting (and ultimately threatening) to Marden’s enterprise than Dr. Simon’s skepticism about the abduction story. In his letter of March 1, 1976 to Philip J. Klass, Dr. Simon stated that “my interest in UFOs was almost entirely on the phenomenon of Barney Hill’s developing racial paranoia which seemed to me to have been the best representation on the matter I have seen.” But that was not Marden’s biggest problem. In the letter Dr. Simon writes:

the Today show [Oct. 20, 1975] was the first time I did this openly to the public at large [state his skepticism about the abduction account]. A few days later I did the same thing on the NBC TV station here, WBZ, which resulted in Betty telephoning and implying that I was lying when I said (what you have said in your book) that Betty’s sister [Marden’s mother] was much interested in UFOs and served as a stimulus, and that the idea of a true visitation had been suggested by her narration in the presence of her sister and her supervisor. She promptly telephoned WBZ and undoubtedly was looking for my appearances and affirmed that her sister was not interested in UFOs and that she had never told the story. Aside from the fact that this is a lie denying her own statements on the tapes we also received a letter from Betty’s mother proclaiming that while I have the right of free speech, I was telling lies abasing her beloved daughter! I revealed the entire story on an hour an a half radio show with Larry Glick.

So that is the true dark heresy, which cannot be admitted: that Betty’s sister was a UFO buff, and encouraged Betty’s fantasies. Every time this was mentioned, Betty Hill (and now Kathleen Marden) would pop up to deny it. But here we have Dr. Simon saying that it’s true.

Marden says that Klass sent a copy of the March 1 letter to him from Dr. Simon to Betty Hill in 1988. I do not know anything about that, but it does not surprise me. Klass and Mrs. Hill exchanged many letters, and he must have sent it along to prove a point he was trying to make. Marden continues:

I had thought about publishing the letter in my book Captured! The Betty and Barney Hill UFO Experience, with Stanton Friedman, but decided not to, due to uncertainty about the identity of the writer. Betty had marked “Forged Letter!” at the top of the letter.

Now, it does not surprise me one bit that Betty Hill had said such an absurd thing. Mrs. Hill wrote and said many absurd things, and not just about her famous UFO incident. Even Marden admits in her book Captured (p. 275), “After Barney’s death, she turned away from careful, objective evaluation, and with subjective enthusiasm began to identify any lights in the sky as UFOs.” Although as I showed in my review of this book in The Skeptical Inquirer (November/December, 2007), after Barney’s death was not the only time Betty Hill said absurd things about UFOs and aliens. There is much evidence of Betty making wild UFO claims with Barney sitting right beside her.

Taking complete leave of her senses, Marden joins in her aunt’s delusion:

I have had it and other letters that Dr. Simon wrote to Betty examined by several individuals, including three who were close to Dr. Simon, and all believe it is probably a forgery. The style and phraseology were not characteristic of Dr. Simon’s writing. An important piece of information is the fact that Dr. Simon signed a non-competition clause with John Fuller. He could not have legally written a book. It is doubtful that Klass would have known this. Dr. Simon was circumspect with regard to sharing his opinions about the Hill case, and it would have been highly uncharacteristic of him to opine or violate doctor-patient confidentiality.

Between the two of us, Marden and I have recently posted four letters from Dr. Simon, three from me (one of which she claims is a “forgery”), and one from her. As I understand it, she has clarified her claim to mean that only the letter if March 1 is a “forgery,” the others are genuine. If you’re inclined to believe her absurd claim, I urge you to compare the four letters. They are all very similar. None of them are “forgeries.”And in all of them, Dr. Simon maintains the same thing: he believed that the Hills had a “sighting” (as do I), but he believed that the abduction story was not real and came from Betty’s dreams. How did Barney learn about Betty’s dreams? Betty always maintained that she never told him about them. But as Dr. Simon explained on the Larry Glick show, Betty was telling the truth saying that she did not tell him directly. However “she did tell it in Barney’s presence [to Betty’s sister, and her supervisor], and that’s where he got it.”

And to settle the matter of Dr. Simon’s skepticism about the abduction story once and for all: you can go to the wonderful audio archive CEIV An Audio History Of Alien Abduction And Animal Mutilation 1957 1976 compiled by the well-known UFOlogist Wendy Connors. Click on track #21:

Betty Hill and Dr. Benjamin Simon are interviewed on the Today Show to promote the NBC TV movie, the UFO Incident, on October 25, 1975. 08:30

You will hear Dr. Simon describe the abduction account as a “fantasy,” and plainly state, “the abduction did not happen.”

Perhaps Ms. Marden will say that this recording is a “forgery,” too?