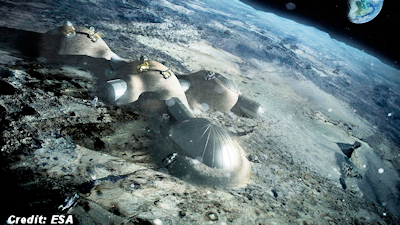 A MANNED base on the moon should become reality
by 2030, according to the European Space Agency.

ESA chiefs say the planned “Moon Village”, which would be built by 3D printers, could help mankind explore the galaxy.

The plans say robots will land on the Moon and prepare the surface for human life, and come complete with a series of stunning concepts showing what the Moon base could look like.

Astronauts could then use the Moon as a space base to push on and explore more celestial bodies, such as Mars, NASA’s top priority target destination.

With water found by NASA on Mars, speculation about alien life is rife as the ESA confirmed their Moon colony dreams at a two-day conference entitled Moon 2020-2030 – A New Era of Coordinated Human and Robotic Exploration. […]

Alien Life May Have Spread Through the Galaxy Like a Plague