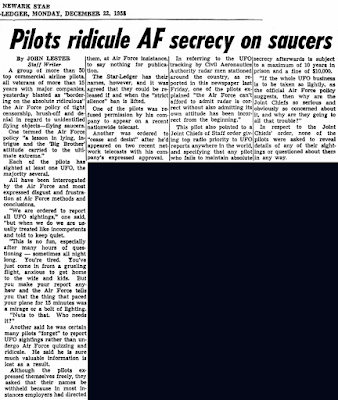 On December 22, 1958, a New Jersey newspaper, the Newark Star-Ledger, published the startling article above.

A group of more than 50 top commercial airline pilots, all veterans of more than 15 years with major companies, yesterday blasted as ‘bordering on the absolute ridiculous’ the Air Force policy of tight censorship, brush-off and denial in regard to unidentified flying objects—flying saucers.

One termed the Air Force policy ‘a lesson in lying, intrigue and the Big Brother attitude carried to the ultimate extreme.’ Each of the pilots has sighted at least one UFO, the majority several…‘ We are ordered to report all UFO sightings,’ said one, ‘but when we do, we are treated like incompetents and told to keep quiet…’ This pilot also pointed to a Joint Chiefs of Staff order giving top radio priority to UFO reports anywhere in the world and specifying that any pilot who fails to maintain absolute secrecy afterwards is subject to a maximum of ten years in jail and a fine of $10,000.’

The “order” mentioned was a regulation promulgated by the U.S. Joint Chiefs of Staff—the heads of the military services—designated JANAP-146, which required military and commercial pilots who had sighted a UFO to immediately file, while still airborne, a CIRVIS (Communications Instructions for Reporting Vital Intelligence Sightings) report. The purpose of such real-time reporting, including a required mention of the unidentified aerial object’s altitude and direction of flight, was to allow the nearest U.S. Air Force base to launch fighters to investigate the sighting.

The regulation also mandated strict secrecy relating to a given report, warning the pilot involved that he would potentially risk severe penalties if he filed a CIRVIS report and subsequently discussed the sighting publicly.

This rare journalistic breach in UFO-related security—essentially a public protest by dozens of highly respected professional pilots—was quickly bottled-up. No wire service picked up the article—which would have potentially resulted in it being published in hundreds of newspapers nationwide—and there was no investigative follow-up of what was clearly a major story by The New York Times, The Washington Post, TIME magazine, or any other journalistic heavy-hitter in the U.S.

Indeed, by 1958, the American elite media had essentially ceased to publish/broadcast serious stories about the UFO phenomenon, instead going for dismissive, light-hearted articles and broadcasts which poked fun at persons who reported “flying saucers”, followed-up by pronouncements by U.S. Air Force public relations personnel which assured Americans that UFO sightings were due to misidentified manmade aircraft or not widely-recognized meteorological/astronomical phenomena—and certainly not the result of something as exotic as spacecraft from elsewhere in the universe.

However, beginning in the 1970s, as the result of various Freedom of Information requests, unauthorized disclosures by former military and intelligence agency personnel, and the findings of one U.S. Senate hearing, the public gradually became aware of a concerted, covert campaign by the CIA to use the media to influence public opinion on various national security-related subjects and situations, including UFO sightings. This decades-long propaganda program is thoroughly documented in The Missing Times: Media Complicity in the UFO Cover-up,

by the late journalist Terry Hansen, which is available as a $2.99 e-book at Amazon.
And, apparently, the CIA’s UFO-debunking media campaign is continuing. As recently as 2013, the agency issued a tweet, alleging that roughly half of all UFO sightings in the late 1950s were the result of its secret U-2 spy plane flights. This absurd claim had already been discredited—the first time it was made—by UFO researchers who published vetted UFO databases which demonstrated that the vast majority of UFO sightings during that era could not even remotely be associated with U-2 overflights. Indeed, the CIA’s claim had even been dismissed by former USAF UFO Project Blue Book chief, retired Lt. Col. Robert Friend, who had gone on-the-record, saying that there was no link.

More recently, the Smithsonian Channel broadcast an episode of its UFOs Declassified series, titled “Pilot Eyewitness” which very obviously tried to discredit UFO sightings by commercial pilots, while at the same time pointedly omitting any mention of the CIA-orchestrated cover-up of one of them—the 1986 Japanese Airlines incident in Alaska—according to retired Federal Aviation Administration supervisor John Callahan, who has openly discussed a CIA-directed meeting at FAA headquarters shortly after the incident.

While the program noted Callahan’s revelations about the existence of the meeting—after all, he had already discussed it in various interviews available on YouTube—it carefully avoided mentioning the lead CIA officer’s admonishment to Callahan and the other attendees, “This event never happened, we were never here, we’re confiscating all this data, and you are all sworn to secrecy.”1

And why was such secrecy warranted? According to Callahan, the officer said that if the government “ever came out and told the American public that [the aircraft crew] ran into a UFO out there, it would cause panic across the country.”2

My two previous articles, I’m Not a UFO Expert but I Play One on TV and Smithsonian Channel’s UFOs Declassified: Simple Debunking or CIA Disinformation? discuss the network’s biased and inaccurate discussion of the UFO phenomenon and ask whether incompetence and prejudice—or, on the other hand, intentional misreporting—is responsible for the glaringly propagandistic series.

presents several documented examples of covert agency influence on the reporting of UFO-related stories by the elite media over the years and is highly-recommended.

While a number of airline pilots—from various countries—have in recent years begun going on-the-record about their personal UFO sightings, the topic is still largely taboo in the industry and the elite media. Hopefully, in the future, more and more pilots will follow the example set by their predecessors in 1958 and bravely discuss the hidden reality so clearly and defiantly reported in the Newark Star-Ledger article.

I’m Not A UFO Expert But I Play One on TV: Smithsonian Channel’s New Debunking Series