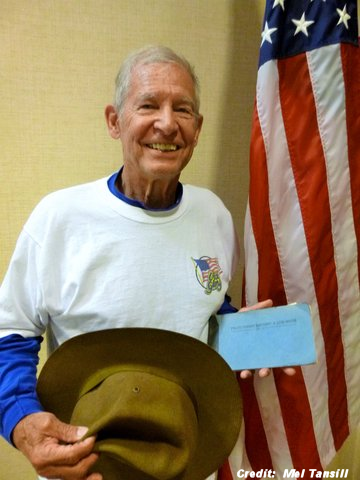 OVERLAND PARK, KS (January 1, 2016) — Tallgrass Creek retirement community resident Jack Sladkey, Captain, U.S. Air Force (retired), saw a huge Texas oil field from his B-25 aircraft in 1958 when he was on a mission to train navigators.

This would have been insignificant had it not been for the fact that the oil field — or what he initially thought was an oil field — sat still off his aircraft’s right wing at 10,000 feet.

“It was a UFO,” Sladey told a meeting of 135 veterans who live at Tallgrass Creek. “I saw it and I remember the experience as if it were yesterday.”

Sladkey, who earned his wings at Vance Air Force Base in Enid, Oklahoma, was flying in a loose formation with three other aircraft on a summer night along the west Texas border. He looked out the window of his cockpit, observed what he assumed to be a brightly-lit oil field and asked his navigator to look as well.

“My navigator said, ‘That is not on the ground. It is off our wing.'”

Sladkey said the object had hundreds of lights. It hovered for about 15 minutes and suddenly flew out of sight, exceeding the speed of sound and disappearing from radar, he said.

“I saw it and six pilots and thee navigators flying with me that night also saw it,” he said. […]

Canadian Air Force Pilot Snaps A Pic Of A UFO