A mysterious display of light poles appeared above the city of Birobidzhan, in eastern Russia last weekend prompting fears of an alien invasion for local residents.

As the strange multi colored display played out over the night sky, thousands were convinced they were being visited by aliens from another world. 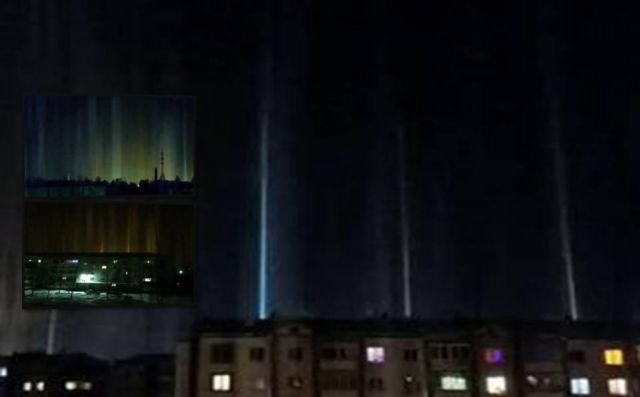 One resident said “There was real fear in the air, at least several dozen people went scrambling to their cars to get away”.

Likened to the Orson Welles broadcast incident, images of the eerie sight were uploaded by residents who thought their city was being invaded by aliens.

In 1938 Orson Welles and his mercury Theatre converted the novel “The War Of The Worlds by H.G. Wells into fake news bulletins that described an alien invasion of New Jersey. Many listeners mistakenly thought the broadcast was the real thing, which resulted in a frenzied panic to get away.

This is not the first time the strange phenomenon has appeared in the skies of Russia. In January of 2015 similar “light poles” appeared in the night skies over the city of Saratov.

The “light poles” are thought to be caused by an unusual atmospheric phenomenon. The optical effect occurs when light is reflected by ice crystals suspended in the air vertically. “Light Poles” are often formed around the moon, city lights and other sources of bright lights. By: Enigmadigest