Wild bees are in decline due to habitat destruction and climate change. Here’s how the loss of those key pollinators may impact our favorite crops

Bees are in trouble. One in 10 wild bee species faces extinction in Europe, and another U.S. species may soon be declared endangered. Now, scientists are abuzz after a new study in PNAS offers even more sobering news: Wild bees declined in 23 percent of the contiguous U.S. between 2008 and 2013, and the absence of those key pollinators could threaten nearly 40 percent of U.S. crops.

And as bee populations dwindle, these are the crops most likely to be affected: 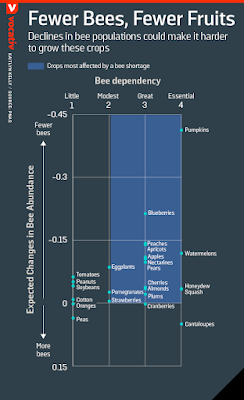 We know bees are in decline and we know that losing pollinators is bad for crops. But until recently, the finer points remained a mystery. “It’s clear that pollinators are in trouble,” said Taylor Ricketts, biologist at the University of Vermont and coauthor of the study, in a prepared statement. “But what’s been less clear is where they are in the most trouble—and where their decline will have the most consequence for farms and food.” […]

Thousands of Dead Fish Wash up On Lake Erie Shore