Three metal balls fell from the sky and crashed down in northern Vietnam at around 6:30 a.m. on Saturday. 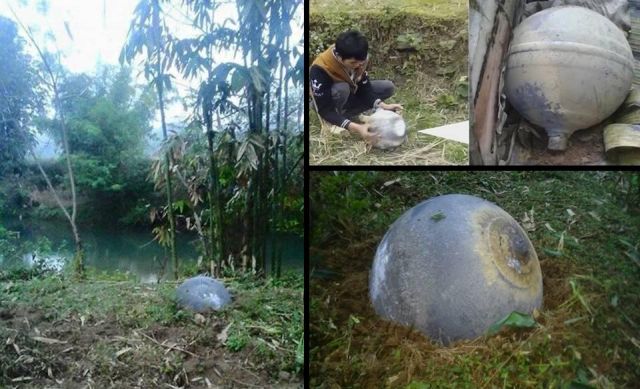 The smallest, weighing 250 grams, smashed through the roof of a house in Yen Bai.

Thanh Nien News reports that a six kilogram sphere fell in a garden three kilometers away. The largest object landed close to a stream in Tuyen Quang and weighed nearly 50 kilogram.

Investigators determined all three balls are Russian-made compressed air tanks that likely fell from a rocket or aircraft.

According to VietnamNet Bridge though, it’s not clear if Russia owns the objects or if they had sold the balls to other countries. Thanh Nien News reports that none of the objects were explosive.

It is not the first time, in the past years several bizarre spheres fell from the sky in Africa, Australia, Latin America and Europe and last October four “mysterious metal balls” were discovered in Spain and Turkey.