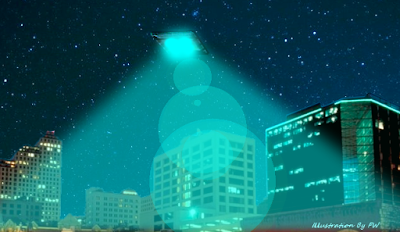 An Ohio witness at Cincinnati recalled a UFO incident from 1998 shared with a grandmother involving a low, hovering square-shaped object, according to testimony in Case 73754 from the Mutual UFO Network (MUFON) witness reporting database.

The witness entered her home after work about 9 p.m. on May 9, 1998, and walked to a bedroom to change clothes.

“My grandmother was still up at that time and she had asked me if the pony keg store was still open that was right across the street from our house,” the witness stated.“I looked out the front window to see if there were any lights on in the store and they were closed. I asked her what she needed and she said that she wanted a couple of root beers to make root beer floats.”

Just outside the store was a soda machine, so the witness gathered change and walked over to the front of the machine and began to drop quarters in.

“The street lights started to blink off and on radically. And so did the machine. And when I looked to the east of these apartment buildings tucked in behind houses I saw something just hovering over them. I knew right away that nothing that big can’t make a sound.”

The witness had an instinct to run away, but the area began to light up.

“And as soon as I wanted to jolt back across the street to get my grandmother this huge blueish-white spot light lit me up and everything around me. I could even see the colors of all the flowers in my grandmother’s yard just about 25 steps away from her front door.”

MY UFO EXPERIENCE: Close Encounter With a Luminescent Humanoid Form