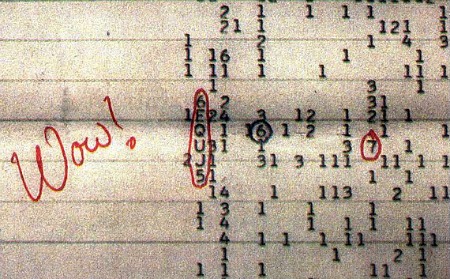 A powerful radio signal received from space in 1977 and never explained may have been the result of a then-unknown comet, not extraterrestrials, an astronomer proposes in a new paper.

The “Wow! signal” is named after what astronomer Jerry Ehman wrote (“Wow!”) next to the paper readout of the radio telescope that recorded it. The signal was very powerful and emanated briefly from a single point in the sky, right at a wavelength many have suggested would be a natural one for extraterrestrial life to transmit in [….]

But Antonio Paris at St. Petersburg College in Florida has found that two comets, yet to be identified in 1977, were in just the right position, and due to their halo of hydrogen might have given off energy in the right wavelength. […]

The ‘Wow!’ Signal: One Man’s Search for SETI’s Most Tantalizing Trace of Alien Life

Arecibo Detects Mystery Radio Burst From Beyond Our Galaxy

The ‘Wow!’ Signal: One Man’s Search for SETI’s Most Tantalizing Trace of Alien Life