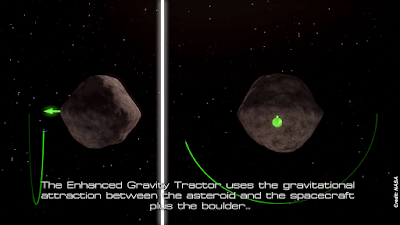 NASA is developing a first-ever robotic mission to visit a large near-Earth asteroid, collect a multi-ton boulder from its surface, and redirect it into a stable orbit around the moon. Once it’s there, astronauts will explore it and return with samples in the 2020s. This Asteroid Redirect Mission (ARM) is part of NASA’s plan to advance the new technologies and spaceflight experience needed for a human mission to the Martian system in the 2030s.

NASA has identified multiple candidate asteroids and continues the search for one that could be redirected to near the moon in the 2020s. Since the announcement of the Asteroid Initiative in 2013, NASA’s Near-Earth Object Observation Program has catalogued more than 1,000 new near-Earth asteroids discovered by various search teams. Of those identified so far, four could be good candidates for ARM. Scientists anticipate many more will be discovered over the next few years, and NASA will study their velocity, orbit, size and spin before deciding on the target asteroid for the ARM mission.

NASA plans to launch the ARM robotic spacecraft at the end of this decade. The spacecraft will capture a boulder off of a large asteroid using a robotic arm. After an asteroid mass is collected, the spacecraft will redirect it to a stable orbit around the moon called a “Distant Retrograde Orbit.” Astronauts aboard NASA’s Orion spacecraft, launched from a Space Launch System (SLS) rocket, will explore the asteroid in the mid-2020s.

Asteroids are left-over materials from the solar system’s formation. Astronauts will return to Earth with far more samples than have ever been available for study, which could open new scientific discoveries about the formation of our solar system and beginning of life on Earth.

The robotic mission also will demonstrate planetary defense techniques to deflect dangerous asteroids and protect Earth if needed in the future. NASA will choose an asteroid mass for capture with a size and mass that cannot harm the Earth, because it would burn up in the atmosphere. In addition to ensuring a stable orbit, redirecting the asteroid mass to a distant retrograde orbit around the moon also will ensure it will not hit Earth.