An Ohio witness at Cincinnati recalled a UFO incident from 1998 shared with a grandmother involving a low, hovering square-shaped object, according to testimony in Case 73754 from the Mutual UFO Network (MUFON) witness reporting database. 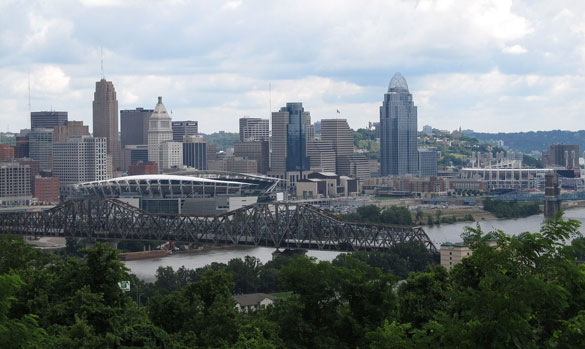 The witness entered her home after work about 9 p.m. on May 9, 1998, and walked to a bedroom to change clothes.

“My grandmother was still up at that time and she had asked me if the pony keg store was still open that was right across the street from our house,” the witness stated.“I looked out the front window to see if there were any lights on in the store and they were closed. I asked her what she needed and she said that she wanted a couple of root beers to make root beer floats.”

Just outside the store was a soda machine, so the witness gathered change and walked over to the front of the machine and began to drop quarters in.

“The street lights started to blink off and on radically. And so did the machine. And when I looked to the east of these apartment buildings tucked in behind houses I saw something just hovering over them. I knew right away that nothing that big can’t make a sound.”

The witness had an instinct to run away, but the area began to light up.

“And as soon as I wanted to jolt back across the street to get my grandmother this huge blueish-white spot light lit me up and everything around me. I could even see the colors of all the flowers in my grandmother’s yard just about 25 steps away from her front door.”

With a population over 200,000, the witness said there was no one else on the busy street that night during the encounter. Pictured: Downtown Cincinnati. (Credit: Wikimedia Commons)

The witness at this point could not move and the lights were coming closer.

“The only thing that I could say is,‘I know what you are and who you are and tonight I am not going to see you guys by myself!!’ As the beam of bluish-white light continued to light me up, I remember that there was not one car in sight off this really busy road. Nobody was out walking their dogs – nobody.”

Then it got really quiet around the witness.

“My senses shifted to such a whisper of nothingness that it’s hard to describe. As soon as this beam of light was taken off me,I ran across the street and bolted inside screaming and crying.”

The first thing the grandmother asked was, “Where have you been?”

“I looked at the clock from the kitchen wall and the time was 10:15. I took hold of her hand and asked her to please come see this thing. And we did. By the time out feet hit the front lawn, there it was, right above her house. The roof was lit up as well, but not beamed. The lights turned violet this time. We stood there in awe and disbelief watching this UFO. It was massive. Rectangular in shape. It had no color really, so I guess it was black.”

The object then began slowly moving southwest over another major busy street and floated away. 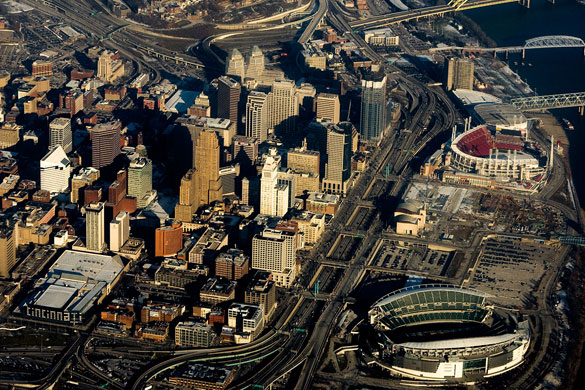 The object emitted light which seemed to cause the witness to not be able to move. Pictured: Aerial view of Cincinnati. (Credit: Wikimedia Commons)

“We felt like we were in a dream state of somekind – just such a floated feeling inside. And then we sat down on the couch together and the television just came on by itself and made grandma jump.”

Cincinnati is a city in and the county seat of Hamilton County, OH, population 296,945.

No images or videos were included with the MUFON report, which was filed on January 9, 2016. MUFON Ohio Field Investigator Jon P. Fry is investigating. Please remember that most UFO sightings can be explained as something natural or man-made. The above quotes were edited for clarity. Please report UFO activity to MUFON.com.