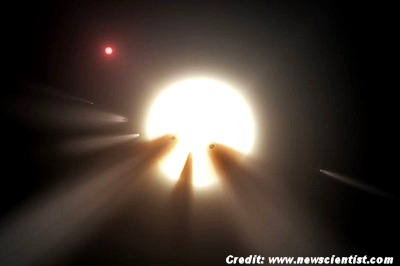 The weirdest star in the cosmos just got a lot weirder. And yes, it might be aliens.

Known as KIC 8462852, or Tabby’s star, it has been baffling astronomers for the past few months after a team of researchers noticed its light seemed to be dipping in brightness in bizarre ways. Proposed explanations ranged from a cloud of comets to orbiting “alien megastructures”.

Now an analysis of historical observations reveals the star has been gradually dimming for over a century, leaving everyone scratching their heads as to the cause.

The first signs of this space oddity came from NASA’s planet-hunting Kepler space telescope, which continually watched the star’s region of the sky between 2009 and 2013. Most planet-hosting stars show small, regular dips in light when their planets pass in front of them. But Tabby’s star dipped erratically throughout the four years, sometimes losing as much as 20 per cent of its brightness. […]