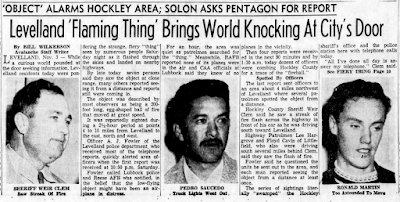 On November 2nd, 1957, immigrant farmers Pedro Saucedo and Joe Salaz were driving down an isolated Texan road when they saw a blue flash of light. Immediately afterwards their truck crawled to a halt. Its engine sputtered to a dead stop as the men witnessed a strange object rise up from the near distance and approach their vehicle. Pedro jumped out of the truck and hid in the brush while Joe, possibly paralyzed with fear, stayed inside.

What they described to be a “rocket-shaped object” flew directly over their vehicle, rocking it violently as it flew past. Both men felt the object’s intense radiating heat and wind gust as it disappeared into the horizon. Pedro emerged from the brush shaken and puzzled. Looking at his friend for an explanation. The truck’s engine started back up and the men decided to find a pay phone to alert the authorities of what they had just witnessed in the Texan desert. Unbeknownst to them both, there would be several other encounters that night. The night the strange craft landed on Levelland Texas. […]

Egg Shaped Objects [UFOs] Reported By Many Sections of State