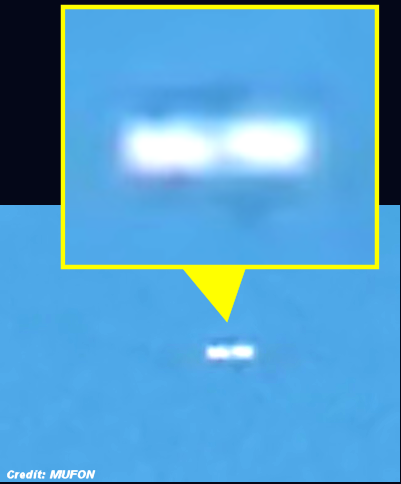 An Indiana witness at Sellersburg reported watching and videotaping a rectangle-shaped UFO crossing the clear blue sky, according to testimony in Case 56640 from the Mutual UFO Network (MUFON) witness reporting database.

“It was moving from west to east at high altitude and at a comparable speed to an airliner in my estimation,” the witness stated.“As I looked closer, I noticed the object did not appear to have wings.”

The witness then began taking photos and videos of the object with his phone.

“After the object was far enough away so as not to be visible, I got in my car and cropped the photos down to get a closer look. It was then that I was pretty sure that what I had just saw was no conventional aircraft. It appeared to have no wings or tailwing. It also appeared to be rectangular in shape, with a perfectly squared front and back. Did not look at all aerodynamic in the pictures. […]