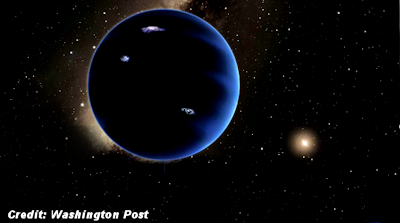 Astronomers at the California Institute of Technology announced Wednesday that they have found new evidence of a giant icy planet lurking in the darkness of our solar system far beyond the orbit of Pluto. They are calling it “Planet Nine.”

Their paper, published in the Astronomical Journal, describes the planet as about five to 10 times as massive as the Earth. But the authors, astronomers Michael Brown and Konstantin Batygin, have not observed the planet directly.

Instead, they have inferred its existence from the motion of recently discovered dwarf planets and other small objects in the outer solar system. Those smaller bodies have orbits that appear to be influenced by the gravity of a hidden planet – a “massive perturber.” […]