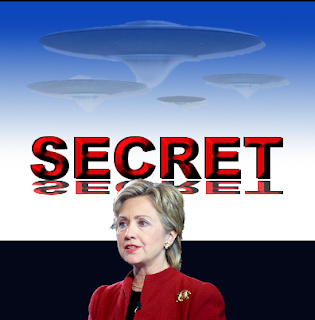 Some ideas about digging

NBC didn’t take the Hillary Clinton UFO bait during Sunday night’s primary debate, staged just a couple of weeks after the former Secretary of State vowed to “get to the bottom of” The Great Taboo. As per tradition, the mainstream media tossed a lot of confetti in the air over her UFO remarks before getting bored and wandering off. But in doing so, they forget – assuming they ever knew – about the formidable and unremitting curiosity of Clinton’s campaign manager, John Podesta.

In 2002, the former Clinton White House chief of staff joined the ad hoc Coalition for Freedom of Information in a federal lawsuit against NASA for access to files related to the so-called Kecksburg incident of 1965. Although that initiative, spearheaded by independent investigative journalist Leslie Kean, produced no smoking gun, the effort shook loose hundreds of previously unreleased documents, revealed that many others had been destroyed or went missing, and forced the space agency to pay the plaintiff’s legal fees.

We may never know what, if anything, Podesta attempted to accomplish on the UFO front during his time as senior adviser in the Obama White House. But he has a roadmap for how to attack the archives on multiple fronts. Or rather, he has access to a strategy promoted by a network of scholars, historians and researchers known as the Sign Historical Group (SHG).

In 2002, with decades invested in clawing through the brambles of federal acronyms stretching back to World War II, SHG says it sent a detailed proposal to Podesta about what to look for, and where. It updated that pitch online in 2014. For member Jan Aldrich, director of the even more specialized Project 1947, the logical – and perhaps only – way to understand the controversy is to toggle the FOIA time machine back to when the U.S. military actually left a paper trail in its efforts to comprehend the incomprehensible. Nearly 70 years later, he argues, the gatekeepers still aren’t on top of this mess.

“The government may have better data,” says Aldrich in an email to De Void, “but they are still puzzled.” Want answers? Then forget about drilling into the gold mine using more recent cases. “If there is more definitive information in the government’s possession,” he adds, “then I would think it would be [at] some high level government scientific lab or … in the compartmentalized stove pipes of special surveillance programs.”

The way SHG sees it, the “Holy Grail of Ufology” is 68 years old. It’s a report whose title is so banal – “Estimate of the Situation,” or EOTS — it sounds like it was written to be invisible. EOTS was the product of the USAF’s first official inquiry into the “flying disc” phenomenon. The brass called it Project Sign, the namesake of SHG. In 1948, Sign analysts from Wright-Patterson AFB’s Technical Intelligence Division sized up the problem and prepared a draft, or estimate, venturing that UFOs likely had “interplanetary” origins. USAF Chief of Staff Gen. Hoyt Vandenberg rejected their best guess and demanded another.

In a November ’48 come-to-Jesus showdown that would probably make a great David Mamet drama, members of the Sign team were assembled in Washington, D.C., and told what to write. Dissenters were reassigned.

“The Estimate died a quick death,” wrote USAF Capt. Edward Ruppelt, who directed the more widely known successor, Project Blue Book, in 1956. “Some months later it was completely declassified and relegated to the incinerator. A few copies, one of which I saw, were kept as mementos of the golden days of the UFOs.” Remaining copies of EOTS have not been located.

But EOTS is just a small piece of the puzzle. SHG’s strategy, broken into categories and subcategories, runs 43 pages and offers numerous leads, most based on existing documents. If a picture paints a thousand words, the payoffs from references from one source alone — a document called “History of Air Technical Intelligence Center 1 July 1952-31 December 1952” — could be incalculable. According to that summary, ATIC’s mission was “to investigate and analyse [cq] reports of unidentified aerial objects or of phenomena of possible concern to the air defense of the US” and to “produce air technical and scientific intelligence studies and estimates of alien capabilities to conduct aerial warfare.”

To that end, states a “Technical Requirements Division” paper, “the installation of gun cameras in F-86’s assigned to the Fighter Squadron at Wright-Patterson Air Base was assured. The purpose of these installations is to provide suitable photographs during flights resulting from reports or sightings of unidentified flying objects.” Furthermore, “15 officer Air Attaches, 10 airmen, 27 ATLO’s [assembly test and launch operations personnel] and 37 investigators” received specialized training. They fanned out into three states “to investigate flying object reports. To date, 100 videon stereoscopic cameras, equipped with diffraction gratings over one lens, have been procured and received at ATIC.”

So what happened to the pix?

And SHG isn’t just poking around for military records – what is the CIA hanging onto? SHG takes aim at an “unremittingly pedestrian” narrative published in 1997 by Agency historian Gerald K. Haines. His CIA’s Role in the Study of UFOs, 1947-90 paper issued the absurd and unsubstantiated claim that more than half of all UFO reports in the late 1950s and 1960s could be explained by high-altitude spy planes.

“Following a lawsuit,” writes SHG, “the CIA released about 900 pages of UFO documents. However, this and later releases by the CIA does not represent the total material on the subject, which has been estimated to be at least 16,000 pages. Furthermore, there are documents held by the Navy, Air Force, FBI, Army and others, which give important insight into the CIA’s activities here. Most of these documents were apparently unknown to Haines, and some are little known to many in the UFO field. Also, Haines apparently is unaware of the huge amount of data in multiple copies, which went to the CIA from other agencies, further indicating the whole story has not been made available to the public.”

AFCRL, AMC, SAC, MERINT, CIRVIS, MATS — the Sign Historical Group’s list of data suspects goes on and on. So John Podesta’s call for accountability isn’t just some vague quirky “X-Files” exhortation. It’s a demand for closing the gaps in official history. After all, we did pay for it, so we do own it. Check out SHG’s ideas for getting this stuff back, at http://www.project1947.com/shg/cfi/sfcfiproposal.htm. De Void came away from it with just one question: Why do we still allow the dead WWII crowd who made the original classification decisions to keep telling us what we can and can’t handle? […]

John Podesta: Pulling Back the Curtain on UFOs